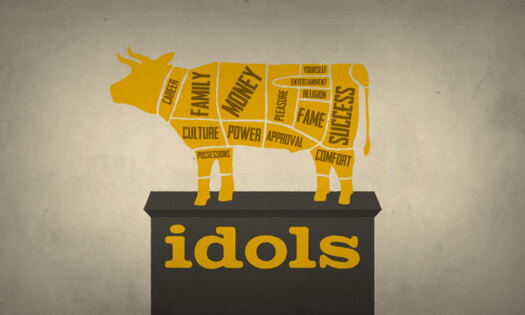 I find it interesting that many people in the world today think that people either worship no god or one God.  Despite the fact that the two of the three of the world’s largest religions are monotheistic (they worship one God, such as in Islam and Christianity), many people worship multiple gods in the world today.  What may surprise you is that many Christians even dabble with the worship of multiple gods.  Even as the pages of the Old Testament were being recorded, ancient Israel dealt with the problem of its people worshipping multiple gods.

“In the Ancient Near East, the nation of Israel was faced with the problem of the gods of other nations creeping into the theology of Judaism and corrupting the true revelation of God. Baal was the god of rain and exercised a powerful influence over the religion of many pagan cultures and even into the Jewish community. This is so because rain was essential to survival. Rain meant the crops would grow, the animals would have water, and the people would be able to eat. If there was no rain, death prevailed. Such visible realities often carried the spiritual character of the nation of Israel into spiritual adultery, that is, worshipping other gods. The Bible does recognize the existence of other gods, but only as false gods (1 Cor. 8:5; Gal. 4:8) and clearly teaches that there is only one true God (Is. 43:10; 44:6, 8; 45:5, 18, 21, 22; 46:9).”  (Bible.org)

A ”god” is someone or something that you worship or attribute ultimate worth to.  Some worship gods who have supreme authority over creation such as Hindus, Sikhs, Bahai, Christians, Jews, and Moslems.  Some worship animals as the ancient Canaanites worshipped the golden calf.  There are people who worship the moon and stars and nature.  Wiccan witches recognize gods and goddesses such as Diana the Moon Goddess and the horned Pan.   Some Eastern and African religions worship the dead or ancestors.  Some Hindu texts recognize thirty-three gods, while others have estimated that Hindus have millions of major and minor gods of all sorts.  Beside these recognized deities, many people worship “things”.  They have made these “things” into gods by attributing ultimate worth to them such as totem poles and idols and tokens and religious items.  You can also worship power or money or control or sex or even an ideology like feminism or socialism.  You can even worship other people like idols or celebrities or political figures.  In North Korea, there are many portraits of the imperial leader that are revered and celebrated.   When you give anything ultimate authority over your life or choices, you worship it.

The scripture for today recognizes that there are many “gods” worshipped by people (1 Corinthians 8:5).  However, it also contains a warning that there is ONLY one GOD who has ultimate authority.  Our
God created “all things”.  HE is the one for whom “we exist”.  As a further clarification, 1 Corinthians 8:6 lists Jesus Christ as the “one Lord, through whom all things are made and through whom we exist”.  Though the scripture is clear that many small-g, “gods”, exist in the minds of people, only ONE GOD (big G) is the author of the universe and is the one who has ultimate authority over your life.  The others are false gods or lesser entities compared to our God (Jeremiah 14:22, Psalm 40:4).

The very first commandment of the famous Ten Commandments makes clear that you are to worship only one deity.  It commands that “you shall have no other gods before me (Yahweh)” (Exodus 20).  So, why would Christians worship other gods?  Why would you give things authority over you if God is the ultimate authority?  Sadly, for many people, there is a natural tendency to “deify the ordinary”.  What does it mean to deify the ordinary?  It means that they are constantly tempted to give ordinary things and people god-like qualities.  I’ve met Roman Catholics who believed in the powers of their crucifixes and rosaries, giving them god-like powers to heal and answer prayers.  I’ve witnessed athletes who believed their success was dependent on a “lucky shirt” or special token. There are protestants who believe that praying in a certain church or certain pew or with a certain pastor holds some kind of magical power to make miracles happen.  All these people deify places, things, or earthly tokens.   Instead, they should worship the God who has the ultimate authority over the earth.
​
Be careful you don’t “deify the ordinary”.   Avoid that natural tendency to give things and people and groups any ultimate authority in your life.  God wants to be the one you respect most, rely on, lean on, and call upon.   God wants you to show ultimate respect to HIS authority.   When you deify the ordinary, it will always and forever be an affront to God.   There is NOTHING from this earth that should be worshipped.   God in Jesus has all authority (1 Corinthians 15:24).  Today, see if you can find some ways to show God that HE is the one you respect above all others, HE is the voice with ultimate authority, HE is the one deserving your ultimate promises and affection.
click here to See april Daily Meditations