“On that day you will no longer need to be ashamed, for you will no longer be rebels against me. I will remove all proud and arrogant people from among you. There will be no more haughtiness on my holy mountain.” (Zephaniah 3:11, NLT) ​ 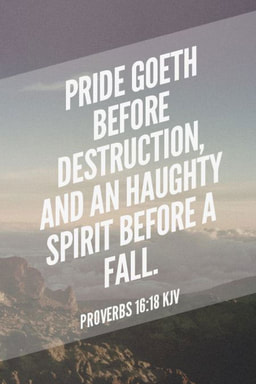 When the prophet Zephaniah was looking forward to the day of redemption for God’s people, Zephaniah celebrated the closeness that would occur between God and the faithful.  He spoke glowing words about the beauty of that time when the Temple would be a place of holiness and God would be wholly present.  In that triumphant time, many other nations would praise God (Zephaniah 3:9). Those who are lame and all the faithful outcasts would be cared for by God Himself (Zephaniah 3:19).  The fortunes of God’s people would be restored.  Those in exile will be brought home (Zephaniah 3:20).  However, some are slated to be left out of the period of redemption.  Today’s scripture from Zephaniah 3:11 clarifies one type of sinner who will rejected by God.  All the “proud and arrogant people” will be refused a place at the redemption celebration.  Their “haughtiness” will not be welcome on God’s holy mountain in Jerusalem.

The scripture for today is a powerful reminder that haughtiness, human pride, and arrogance are not celebrated by God.  They are seen as detrimental to true faith.  Proverbs 16:5 teaches that “EVERYONE who is arrogant in heart is an abomination to the Lord”.  Proverbs 6 lists seven things that are an abomination to the Lord.  The first in the list is the person with “haughty eyes” (Proverbs 6:17). The prophet Jeremiah wrote of God’s anger at the arrogance of the Moabites, who were haughty in heart (Jeremiah 48:29).  Isaiah spoke of God’s disdain for King Sennacherib’s arrogance when he attacked Jerusalem (Isaiah 37:29).  James 4:16 calls all arrogant boasting “evil”.  With overwhelming evidence, there is ample proof that God has no respect for selfish human boasting, arrogance, or pride.

Are there ways you flirt with pride in your faith-walk?  Is there some way you are letting arrogance have its place in your life without knowing?  Arrogance, pride, and haughtiness are more common among Christians than they first appear.
​
As an elder in his church, James makes many important decisions.  Recently, he voted against inviting an Alcoholics Anonymous group into his church.  He didn’t like how they dressed when they came to meetings.  James felt it would not help improve the “image” of his church in any way.
James, Jasmine, Katherine, Kevin, and Pastor Schuhart all suffer some form of pride.  For several, its spiritual pride.  For some, its personal pride.  If you ask each of them if they are prideful, every one of them would say “no!”.  However, this is not the case.  James is prideful about his church’s “image”.  Jasmine’s self-importance is her undoing.  Katherine wants her son to “marry up” because she views his fiancé as beneath her.  Kevin’s pride is more hidden.   He takes pride in his work and is resentful if others don’t appreciate him enough.  Pastor Schuhart would tell you he is a “humble servant of God”.  This belies the fact that his choices have not helped the congregation to accept any other pastor in “his” pulpit.  People in that church still refer to their church as Pastor Schuhart’s church.   Really?

There are many ways to let pride and arrogance creep into your faith journey.  But know this, all forms of pride and arrogance and haughtiness are abhorrent to God.  When you elevate yourself in some way, you denigrate the glory of God.   Do you ever look down at someone who knows less about the Bible than you do?  Be careful of spiritual pride.  Do you love the limelight or enjoy being singled out for some appointment?  Selfish pride is knocking on your door.   Do you enjoy seeing others fail or falter?  Do you have little patience for those who know less than you do?  Does your appearance matter a little too much?  Do you fish for compliments?  Do you secretly desire lots of “likes” and other positive responses in social media programs?  In many and varied ways, pridefulness can ruin a good person.   It took down King David when he desired Bathsheba.  It wrecked the wisdom of Solomon.  It has controlled the thoughts of all too many in the history of our faith.  It has inspired wars and suffering and jealousy and envy throughout every age.
​
Root out any form of haughtiness or pride or arrogance in your thoughts, soul, or relationships. There is a reason God calls these an abomination.
​
click here to See july Daily Meditations