“Now concerning the times and the seasons, brothers, you have no need to have anything written to you. For you yourselves are fully aware that the day of the Lord will come like a thief in the night.” (1 Thessalonians 5:1–2, ESV) 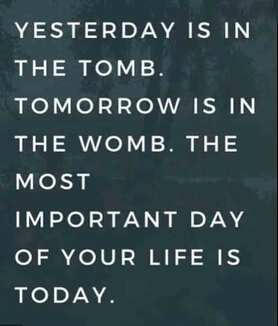 The scripture above is a constant reminder from scripture that we have no control over the passage of time.  We cannot stop time, nor can we know what time will bring.  Sometimes, with the passing of “times and the seasons”, we are given glimpses of what is to come.  In the same way that you know when to plant and harvest with the passing of the seasons, you may get glimpses of what is to come your way.  Then again, the scripture makes painfully clear that “the day of the Lord will come like a thief in the night”( 1 Thessalonians 5:2).  Prophets and priests and people may be given hints of the end times, but they will never be sure until the end arrives.   Because of this, it is crucial that you use the best of your time on earth.  You never know when things will change, accidents will happen, or it will be too late to accomplish something important.

Even the best of God’s children cannot know some things about the passing of time.  In the story below from Billy Graham, you can see that even the great preacher missed his moment.  Even Billy Graham didn’t know that time would pass him by, and he would regret a lost opportunity….

“On the way back to the Kennedy house (in 1961), the president-elect stopped the car and turned to me  [to Billy Graham]. ‘Do you believe in the Second Coming of Jesus Christ?’ he asked.
“ ‘I most certainly do.’
“ ‘Well, does my church believe it?’
“ ‘They have it in their creeds.’
“ ‘They don’t preach it,’ he said. ‘They don’t tell us much about it. I’d like to know what you think.’
“I explained what the Bible said about Christ coming the first time, dying on the Cross, rising from the dead, and then promising that he would come back again. ‘Only then,’ I said, ‘are we going to have permanent world peace.’
“ ‘Very interesting,’ he said, looking away. ‘We’ll have to talk more about that someday.’ And he drove on.”

Several years later, the two met again, at the 1963 National Prayer Breakfast.
“I had the flu,” Graham remembers. “After I gave my short talk, and he gave his, we walked out of the hotel to his car together, as was always our custom. At the curb, he turned to me.
“ ‘Billy, could you ride back to the White House with me? I’d like to see you for a minute.’
“ ‘Mr. President, I’ve got a fever,’ I protested. ‘Not only am I weak, but I don’t want to give you this thing. Couldn’t we wait and talk some other time?’
“It was a cold, snowy day, and I was freezing as I stood there without my overcoat.
“ ‘Of course,’ he said graciously.”
But the two would never meet again. Later that year, Kennedy was shot dead. Graham comments, “His hesitation at the car door, and his request, haunt me still. What was on his mind? Should I have gone with him? It was an irrecoverable moment.”
​ (from the section on Evangelists in 6,000 Plus Illustrations for Communicating Biblical Truths).

When the two parted, I’m sure that Billy Graham thought he would have another chance to talk to John F. Kennedy about the church, the Bible, sin, and end times.   Because of an assassin’s bullets, that conversation never occurred.  Their next planned meeting was stolen as if by a “thief in the night”.

You may have plans for the future.  You may have a conversation needing to happen.  Someone you know may need to hear your voice say, “I’m sorry”.  God may need you to stop for a few moments to pray or visit a person in need.   Out of all the opportunities you are given in your life, some carry more importance.  Some of those faithful conversations, loving moments, times of forgiveness, or gifts of grace will need your attention in the very near future.  Will you be able to separate out which of those moments are “more holy”, “more special”, “most needed by God"?   I hope so.

One word, one hug, one more conversation inspired by the Holy Spirit can change everything.  Pick your work for the day carefully.  Don’t hold back when God needs you to say something, be somewhere, see someone.  It may be the perfect moment.  Don’t let those special, holy moments pass you by without notice…  disappearing like a “thief in the night”.
click here to view other august Daily Meditations