“Samuel did not yet know the Lord because he had never had a message from the Lord before. So the Lord called a third time, and once more Samuel got up and went to Eli. “Here I am. Did you call me?” Then Eli realized it was the Lord who was calling the boy. So he said to Samuel, “Go and lie down again, and if someone calls again, say, ‘Speak, Lord, your servant is listening.’ ” So Samuel went back to bed.”
​ (1 Samuel 3:7–9, NLT) 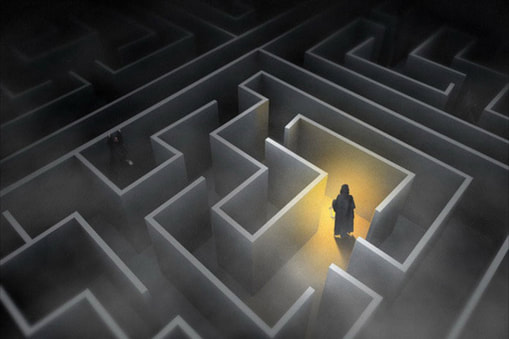 Carl M. Tucker told Reader's Digest the following true story:  "I was an air-traffic controller stationed at Selfridge Air National Guard Base in Michigan. One morning we picked up a Montana National Guard passenger aircraft. Instead of identifying the plane by its five-digit tail number, its pilot radioed, “Selfridge Approach, this is Pig Sty One.” As we were taught to refer to aircraft by whatever call sign the pilot used, the controller thereafter called the craft “Pig Sty One.” Just after touching down, the pilot contacted the tower.
“Selfridge,” he said, “our call sign is not ‘Pig Sty one.” It is ‘Big Sky One,’ and we have the governor of Montana on board!”

Confusion, misunderstandings, and mistakes are not uncommon in a spiritual life.  Just as a tower can misunderstand a pilot’s messages, people can mistake God’s messages.  When spiritual miscommunication and mistakes happen, it can make your understanding or direction unclear.  Sometimes, the only way to reorient yourself after a few spiritual screw-ups or when confused is to communicate with God in a better way.  It often will help to get advice from someone close to God to understand what you are missing.

In the scripture for today from the first book of Samuel in the Old Testament, Samuel is being called by God to be a prophet.  The first verse of our scripture sets up why Samuel is having a problem responding to God’s call:  “Samuel did not yet know the Lord, because he had never had a message from the Lord before” (1 Samuel 3:7).  Samuel was just a young man.  He didn’t recognize God’s voice.  He didn’t understand that God has the ability to speak with a person.  Three times Samuel was called by God in 1 Samuel 3:1-9.  Each time, Samuel didn’t recognize God’s voice and thought the prophet Eli was summoning him.  After the third attempt by God to call Samuel (1 Samuel 3:8), Eli realized what was happening.  Eli was a wise old prophet who had known God for a long time.  Eli “realized it was the Lord who was calling the boy”.  Eli told Samuel that the next time he heard the voice, he should say, “Speak, Lord, your servant is listening”  (1 Samuel 3:9).  Samuel followed the wise advice of Eli and did as commanded.  The Lord called again, and Samuel answered the call.  Because of this calling, Samuel became one of the greatest prophets of the Old Testament, even anointing David as King.

When God called Samuel to be a prophet, Samuel was confused.  He didn’t understand God wanted to speak with him.  Samuel mistakenly thought that Eli was calling when it was really God who was initiating contact.  Thankfully, Samuel talked to Eli about it.  Thankfully, Eli was a prophet of God and knew what to do.   The confusion was cleared up quickly, with Eli’s help.  Samuel and God grew very close.

At various points in your spiritual life, you might get your “wires crossed”.  You might not understand a message you feel God is sending you.  You also might not understand something new happening in your spiritual life.   At times like these, it is important to do the two things that Samuel did in the scripture for today.  First, Samuel sought the help of wise old Eli.   When you are in spiritual confusion or need guidance to get back on track, it would be wise for you to seek out someone who knows God well.  Did you notice I didn’t say, “Speak to a clergyman”?   There is a reason for this.  Too many people in spiritual leadership are there for the wrong reasons.  Some desire the accolades of others.  Some have a worldly agenda.  Some see spiritual leadership as merely social activism.  Some don’t know God all that well.  You need to speak with a wise person who knows God well.  Second, Samuel followed Eli’s instruction to initiate contact with God.   It is important that you do certain things in order to understand what God is doing.  This may involve prayer.  It may take time.  It may require your attention or some changes.  One way or another, God will clear up any spiritual confusion in time if you are truly listening (i.e. in 1 Samuel 3:9) and obeying the Lord.

Spiritual confusion and misunderstandings will occur in your life.  They will require that you take time to reorient yourself with respect to God.  The miscommunication will usually take time and prayer and maybe even holy advice to clear up.  However, the results will be greatly worth your effort.  If God is trying to get a message to you, you will want to know it, heed it, and work through it.
​
Is there something in your spiritual life that needs “clearing up”?  Are you getting mixed messages from God?  Are you confused about something your heart is telling you?  Seek direction from those who know God well.  Ultimately, learn to listen and discern and follow God’s voice.
click here to See august Daily Meditations