“If your brother sins against you, go and tell him his fault, between you and him alone. If he listens to you, you have gained your brother.” (Matthew 18:15, ESV) 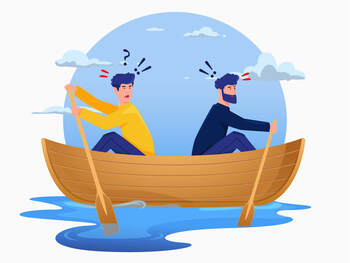 In a meeting this past week with a lifelong Christian named Carol, I heard some very common musings.  As we talked, Carol mentioned that she was upset about a conversation with a person in her church.  The church person explained to Carol that she had heard a rumor that Carol had been involved in some shady business deals.  Carol was shocked and said to the church friend, “Why didn’t you come talk to me when you first heard?”  The church friend replied, “I don’t like conflict.  I didn’t want you to be upset.”

Sadly, gossip and rumor and innuendo and all kinds of passive aggressive occurrences are too common in the church because of this kind of interaction.  Too many Christians will not speak directly to others in the church about gossip or untruths or issues because they fear conflict.  They think that always being nice is always being faithful.  Where in the Bible does it say that?  If you study the scriptures faithfully, you will learn that constructive conflict was often used by the faithful in order to save souls, help the needy, overcome obstacles, and keep the church on the path to righteousness.

When David sinfully committed adultery with Bathsheba, the prophet Nathan was sent by God to challenge David’s actions.   When Peter had issues with the adoption of Gentile Christians into the faith, Paul confronted him in Jerusalem.   I could name dozens of other examples where faithful people of the Bible were called by God to challenge and correct the errors of others.  The purpose of the conflict involved was to bring about righteousness, save souls, correct sinful influences, and set people on the right path to salvation.   If the conflict would not have occurred, the souls involved would have remained in jeopardy.  The conflict was not only called for, but holy.  The conflict was not done out of vindication but from a love for God and a love for the other person.

After meeting with a couple for counseling over a period of six months, I saw that their relationship was not getting stronger.  Conflicts arose weekly.  During the latest session, the wife mentioned that she was very hurt by something her husband did that week.  The husband was shocked.  He thought he had been a good husband and was working hard on the relationship.  The wife said, “I had a bad day on Tuesday.  I was snippy.  I knew it.  I hated it.  So, when Keith came home from work, I begged him to talk with me.  He picked up on my mood and said he would rather go in down to his workshop.”
The husband said, “I was trying to be nice!  I didn’t say anything, so I wouldn’t get in trouble!”
I replied to the husband, “That was stupid!   You had a chance to help and instead you ran away into the workshop!  She really needed to talk with you.  I believe it would have helped greatly.”

Right after I called his action stupid, I recoiled inside myself.  Why was I so critical?  Why did I use such harsh language?   I told the man I was sorry for calling his action stupid.  Two days later, after worship, the man came to me and thanked me for saying his action was stupid.  He responded that the use of that word shocked him into examining what he was doing.  Only then did he realize that his father did the same thing.  When his mother was upset, his father would go out to the garage and work on cars.   Keith did not want to follow his parents’ example.  It never did them any good.

The scripture for today reminds us that sometimes confrontation and conflict can be beneficial.  They can save souls.  They can save friendships and marriages.  In the right context, confrontation and conflict are not only needed but godly actions.  If you think being a good Christian means you should only be “nice” and avoid all conflict, you are sadly mistaken.  This way of thinking is not biblical and unhealthy in the long run.

Matthew 18 is filled with various teachings by Jesus about the Kingdom of Heaven.  Therein, Jesus explained to the disciples about a range of topics including who will go to heaven, what heaven is like, and what will prevent you from getting to heaven.  In Matthew 18:15, Jesus made clear that when a brother (or sister) in the faith “sins against you”, your response should not be to get even or damage the relationship further.  Instead, Jesus instructed the faithful to “go and tell him his fault, between you and him alone”.  You are not to recruit all your friends to the fight.  You are not to post something all over social media.  You should first talk one-on-one.  Jesus’ hope was that the relationship may be saved, “and you will have gained your brother” as a true friend.  Jesus’ prayer was that the Christian friendship would be saved and the truth discovered.

Do not ever deceive yourself into thinking that all conflict and confrontation are wrong or evil or bad or unwanted.  Sometimes, conflict or confrontation are exactly what God requires.  This is not to say that you should be confrontational or love conflict.  What it means is that God may require you to use conflict or confrontation as a tool to preserve a holy friendship or restore faith.  You just might find out that what you believed was not correct; what you heard was not the truth.
​
Holiness can be difficult at times.  It can require you to step out of your comfort zone and bring up things that might make you feel awkward.  You might have to talk about issues that are challenging or fraught with danger.  It is also important to remember that someone might bring up an uncomfortable truth to you.  Instead of becoming defensive, why not listen with a faithful heart?   Seek God’s guidance as to the truth of the matter.  Be open to active listening.  Out of love, hear what others have to say even if you abhor the subject matter. You might also discover who among your acquaintances is truly a faithful and trustworthy friend.
​