“They traded the truth about God for a lie. So they worshiped and served the things God created instead of the Creator himself, who is worthy of eternal praise! Amen.” (Romans 1:25, NLT) 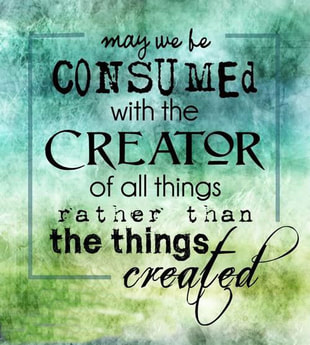 In the first chapter of the book of Romans, the Apostle Paul describes the sins that had permeated humankind from the beginning of creation.  He notably believed that the “wickedness of men” and “ungodliness” had replaced the respect and honor that God was due (Romans 1:18).  In pointing out these evil traits all too present in the lives of humankind, Paul wrote that instead of worshipping the “Creator Himself”, human beings were all too prone to “worship and serve the things God created instead” (Romans 1:25).  This is a profound understanding.  There are people who worship movie stars and singing idols more than God.  There are people who worship money and power and wealth and health.  God gives us so many things to help with life and we end up worshipping them instead of the God who gives so freely.  It should not be.

You would think that in more modern times human beings would have learned to reject the worship of “things” and instead show honor to the Creator.   Sadly, this is far from true.  Humanism and socialism and atheism have taken hold of the hearts and minds of men.  They peddle it in colleges all over the world.  Groups like Antifa and Black Lives Matter spout it on their web sites.  News organizations expound the virtues of these “modern” concepts.  Sadly, they continue to do what the wicked have done for generations since the beginning of time.  They deify the creature and “things” and concepts and causes as worthy of honor OVER the Creator.

Max Lucado explained it this way in his book, In the Grip of Grace.  “We understand how storms are created. We map solar systems and transplant hearts. We measure the depths of the oceans and send signals to distant planets. We … have studied the system and are learning how it works.
And, for some, the loss of mystery has led to the loss of majesty. The more we know, the less we believe. Strange, don’t you think? Knowledge of the workings shouldn’t negate wonder. Knowledge should stir wonder. Who has more reason to worship than the astronomer who has seen the stars? …
Ironically, the more we know, the less we worship. We are more impressed with our discovery of the light switch than with the one who invented electricity.… Rather than worship the Creator, we worship the creation (see Rom. 1:25).  No wonder there is no wonder. We’ve figured it all out.” (As copied on p. 338 in Grace for the Moment)

Human pride has been so sure that it has everything “all figured out”, that it finds no room for God’s place in its world.   Patients go to doctors to be healed when it is God who heals.  Professors discuss the principles of physics as if they dropped out of the sky from nowhere.  The hugely complicated human genome was indexed over the past few decades.   Rather than showing the amazing complexity God has put into the human body, biologists, virologists, doctors and others have instead believed it is all a consequence of luck and breeding and natural processes instead of shaped by the influence of God.   So many forms of human thought have raised the worth of human reasoning to epic proportions and relegated God to a bygone era.  Sadly, it is this kind of human pride that belongs in a bygone era!

Though the Bible encouraged people to fast during certain holy periods of life, fifty years ago scientists declared that fasting was not healthy.  In the past decade scientists have discovered a great potential for healing when fasting.  Now, they advocate it!   Though the Bible taught of the dangers of alcohol and drug use, scientists and politicians in present day argue that there are no problems with moderate use of these things.  They even legalize their use and promote them.   I guarantee we will soon find that the regular use of alcohol and drugs are damaging to the body even in moderate use, just as the Bible declares.   Why is it that humans trust in their own reasoning rather than God’s wisdom?

In every corner of modern life, there are advocates for the worship of earthly things.  People like me believe in the worship of God.  Many of the faithful feel like we are “voices shouting in the wilderness” as John the Baptist proclaimed (John 1:23).  So many people have the belief that people who worship God are Neanderthals and backward thinkers.  They equate faithful people to “flat-earthers”.  Many make fun of those who stand up for God or biblical beliefs.    These modern voices of faithlessness continue to delude generations.   They pull people away from God using their rhetoric or smooth talk.  They sell lies and half-truths, and people fall under their spell.

How will you choose to live?  Will you in any way worship something that is created?   Will anything become more important for you than God?   Jesus urged all the disciples to “seek first God’s Kingdom and God’s Righteousness” (Matthew 6:33).   I pray you are one of those disciples who takes Jesus’ word to heart.   Is God first in your life?  Do you understand everything in life through the lens of faith?  Have you relegated “creature comforts” as less important than godliness and righteousness?  I pray so.
​
I see it over and over.  Every time a person decides to worship something created instead of the Creator, it always comes back to bite them at some point in life.  ALWAYS!   Don’t let this ancient prideful sin gather worth in your heart and soul and mind.   It will only keep you from seeing God’s wonder, God’s power, God’s grace, and God’s place in your life.