“Then the fifth angel poured out his bowl on the throne of the beast, and his kingdom was plunged into darkness. His subjects ground their teeth in anguish, and they cursed the God of heaven for their pains and sores. But they did not repent of their evil deeds and turn to God.” (Revelation 16:10–11, NLT) 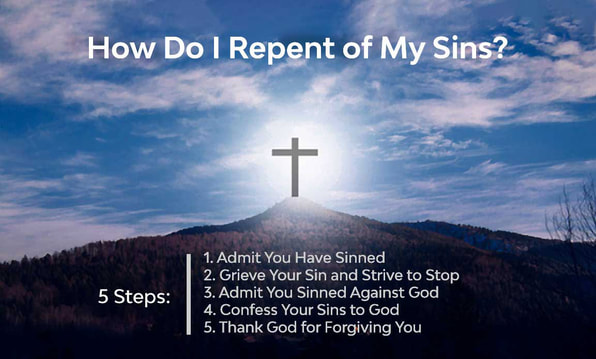 Due to the sin in the world in the last days, Revelation tells us that God will send angels to cause suffering among who have sinned.  God’s intent is to spark the people to confess their sins, repent of the evil they had caused, and return to God and God’s righteous ways.   Instead, every time that God will send an angel to offer up suffering, those people will not repent.  They will harden their hearts against God.

​Look at the scripture above from Revelation 16.  The “fifth angel” sent by God to pour out wrath against evil in the world causes a bowl of God’s wrath to be poured out against the evil beast and the evil kingdom that follows the beast.  The response?   There was “darkness” and “anguish” and “pains and sores” upon the beast and his followers (Revelation 16:10-11).    God wanted to see the evil ones repent.  Instead, they “did not repent of their evil deeds and turn to God” (Revelation 16:11).  As is common, the ones practicing evil “cursed the God of heaven”.  Other versions of the Bible state that they “blamed God”.

In social media over the past few weeks, I have noticed a lot of people blaming God for evil in the world.   But does God cause that evil?  NO.  How does that evil come about?  Satan and those who do evil perpetuate it.  Yet, who do they blame when the consequences of evil deeds cause suffering and pain?  They blame God.  You will often notice people who have poor faith or no faith at all are quick to blame God or God’s ways for the problems in the world.   I often hear humanists state that there can’t be a God if there is suffering of good people in the world.   They claim that there can’t be a God if there are bad things happening in the world.  God stops suffering right?  Therefore, they conclude that either God loves suffering, or God causes suffering to people, or there is no God.  Their logic is faulty.  The scripture for today proves that God causes suffering in the world to happen to those who promote evil.  God will even cause good people to suffer in special scenarios where a greater good will come out of it.  Faithless people don’t see the whole picture.  They don’t appreciate God’s grace nor God’s plans.  Worse yet, they don’t blame Satan for evil in the world.  They don’t blame evil people.  They blame God.

When James was a teenager, he got himself in a load of trouble.  He would disrupt classes in school with pranks.  He got into fights.  He was a poor student.  He received detention every few months.   James was of small stature.  Because of that, he was picked on a lot.  He also had a big chip on his shoulders.  He would fight anyone at the drop of a hat.

James went to church but did not believe in God.  He went because his parents made him go.  When James was young, he blamed bullies at school for his bad behavior.  When he was a teenager, he blamed his teachers for being boring or classes for being a waste of his time.  Because of his poor grades and problems in school, James did not go to college.  After graduation, he started work at a nearby factory.  When a fight broke out at a union hall meeting and James was implicated, he blamed others for the fight.  When he was fired, he drank a lot.  When a bar fight landed him in a hospital, he blamed the bar owner for the episode and demanded the owner pay his expenses.

Throughout this whole while, James believed God was either non-existent, aloof, or in his words “a worthless piece of _____”.   James had nothing good to say about God.  He made fun of Christians in his family and among his friends.  When he got into trouble, he wouldn’t pray.  He blamed God for being callous and causing his suffering.  He blamed others for everything else.

The crazy thing is that James fell in love with a wonderful Christian woman named Sylvia.   She saw something wonderful in him that few others could see.  Sylvia prayed for James for seventeen years of their marriage before James finally came to really believe in God.   Then, something wonderful happened to James after he repented of his sins.  No longer did James call God names or blame God for life's problems.  He took responsibility for his own shortcomings.  He openly admitted his faults and mistakes.  He came clean with God.  He even called upon his friends to repent for their wrongs and clean up their lives.   To date, I know of dozens who have come to Christ after talking with James and Sylvia.

You will never get things right in your life if you fight with God.  You will never feel right in your soul as long as you blame God and others for bad things caused by evil in this world.  As long as you delude yourself into thinking that God is the problem, joy will elude you and evil will have its way with you.
​
If you read the scripture reading for today closely, you may notice that God didn’t cause the suffering of the beast and evil kingdom to enjoy their suffering.  God caused the bad things to happen to the evil ones in order to elicit their repentance and return to faithfulness.  God doesn’t hate evil people.  God hates the evil they do.  God wants them to repent and return.  God is always hoping for people to turn from their evil ways, repent, and make things right.  God does fight against evil in the world.  So, be careful to choose your sides and arguments well.

So many people today love putting blame in all the wrong places.  There are people who blame guns for murders.  They blame parents for the bad behavior of children.  They blame whites for racism.  They blame European heritage for slavery.   All these are partial or complete lies.   Evil is what causes sin.  Evil causes punishment.  Evil damages lives.  Evil destroys the good.   Why blame God for what is evil in the world?  Why blame others for your own sins?  Why put the blame in the wrong place?
​
If you are faithful Christian, repentance should come easy.  You should realize by now that a lot of the bad that comes in your life is from evil in the world or in you.   You should also realize that God is your salvation, grace is your hope, heaven is your real home, and a deep relationship with God changes everything.  God is not your enemy but your support.  Jesus is not the problem; He is your Savior.   Sin is not a guilty pleasure but a source of suffering.   If you find that your life is filled with bad, take responsibility for your part of the blame.  Repent.  Make things right.   Turn back to God.   There is NO other way to peace and a contented soul.