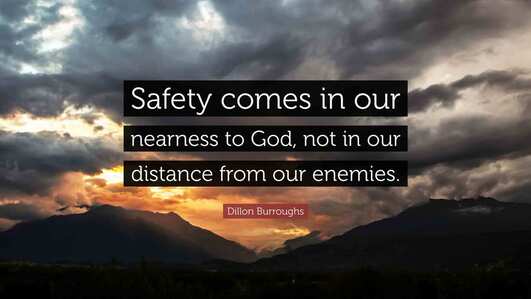 The second half of the scripture for today display’s God’s view of the righteous person who “draws back”.  This is a person who gives up being faithful in order achieve some earthly benefit or falls into a spiral of sinfulness.   Essentially, the righteous person who “draws back” is known as a backslider.  He or she backpedals on their relationship with God.  Each chooses not to follow God with all the heart and soul and mind and strength.   What is God’s response to this backpedaling?   As the verse for today discloses, God finds “no pleasure in him” (Hebrews 10:38).

You have probably met people who pulled back from following God.   Maybe a trauma, a death, or an accident caused the person to question God’s protection.   It might be that the person fell in with the wrong crowd or married someone who was not religious.  Then, the person no longer felt the need to worship God.  There are people who have given up on their faith, because they met poor examples of Christians.  They might have been hurt by an unjust or worldly act by a religious person. There are a million excuses why people “walk away” from God.   In the end, God’s response is the same.  God takes “no pleasure” in the person who throws away a faithful relationship with Heaven.

If you travel to Jerusalem in modern times, you will see the Temple Mount.  This ancient holy place contains the remnants of the original Temple built by King Solomon.  Solomon was blessed by God in several ways. When Solomon asked for the wisdom to govern Israel, God granted him extraordinary wisdom in which to lead the people.  He was renowned in the ancient world for his wisdom, kings and queens even coming to learn from him (See 1 Kings 10 for just an example).  Though King David greatly desired to build a temple in Jerusalem, it was Solomon that God chose to build this holy site.   Solomon was blessed with great wealth, a large family, and so much more.

However, Solomon’s relationship with God turned sour.   The very blessings that Solomon enjoyed came between him and God.   When Solomon was asked by his foreign-born wives if they could burn incense to their foreign gods, Solomon allowed it (1 Kings 11:8).  1 Kings 11:4 explains that Solomon’s wives “turned his heart after other gods”.  They seduced him into worship of other religions.  To appease his wives, he even built altars to other gods so they could worship there (1 Kings 11:7).  In the end, God cursed Solomon’s actions.  God caused a split among Solomon’s children and the leadership of Israel.  This led to numerous problems between Israel and Judah and the neighboring countries.  What caused God to pass judgment against Solomon?   Solomon “drew back” from God.  Solomon became a backslider.  Worldly relationships and idolatry lured Solomon away from God.

Tom Greentree wrote a very interesting article online about people who lose their faith.  He listed
“10 Reasons People Turn Away from Faith in Jesus” (tomgreentree.com).  Here are his findings:

Disgust in other Christians. People who have been hurt by other Christians will often pull back, feeling betrayed and stung by the hypocrisy they’ve experienced. Whether through church division or personal conflicts, people can question the validity of the Christian faith when Jesus followers seem less Christian than those outside the church.

Disappointment with God. When God doesn’t seem to be hearing me or answering my prayers, disappointment can set in. Often this is due to unrealistic and untrue expectations of what God was going to do in the first place, but it also can happen when God seems silent and unresponsive. Are you even there, God?

Difficulties. Related to disappointment, we can experience difficulties in life that can drive us away from God. Following Jesus can make life seem worse, blowing up relationships, inviting persecution, the rejection of family, and hard times. Or, quite simply, the ongoing call to take up our cross and follow Jesus can become more than we signed up for.

Distractions.  We live in a hyper-busy world, and our attention can jump from one thing to another. I’ve seen people who used to be really fired up but now have other priorities. Now I’m on to a new business venture and I don’t really have time to invest in spiritual growth. I signed the kids up for hockey and we just can’t make it to worship anymore. I’ve got this new hobby, etc. And distraction from faith leads to the destruction of faith.

Doubt. Of course, there are those who struggle with doubt. Maybe they aren’t so sure about the resurrection or that Jesus really is the Son of God. Perhaps they’ve got doubts about the Bible. This could be honest doubt, and that needs to be expressed in an open community. Doubt can be a great pathway to growth and learning.   Doubt could also indicate a lack of discipleship–they’ve never really been taught or lead to grapple with the basics of faith. But doubt can also be a smoke screen for sin (next point).

Desires. The truth is, some people leave the faith because they don’t want to live under Jesus’ authority.  I want to sleep with her. I want to serve myself. I  want to rip them off. I want to do what I want to do when I want to do it.  And they walk away from Jesus. Often when people voice concerns about the uniqueness of Jesus, it’s covering over a desire to do something that contradicts his Lordship. By ditching Jesus’ leadership, they feel free to live how they want.
​
Distance. Distance often comes as a result of other things–we feel disappointed or disgusted, we are distracted or have doubts, and we pull away. We isolate ourselves from other followers of Jesus and before too long we just don’t feel a part of things anymore. Sometimes distance is chosen, and other times is comes due to mental or physical illness, difficult family situations or a change in lifestyle. But make no mistake, distance isolates and leads people away from faith.

Drift. I’ve noticed that people who never put any intentionality into their spiritual growth simply drift. Like a boat with no oars, no sail and no motor, they end up somewhere far away. Perhaps they had embraced a basic faith in Jesus, but without intentional community, without incorporating spiritual practices, without choosing to follow Jesus, they ended up drifting away.

Deceit. And finally, we can be deceived. We believe a lie about who Jesus is and what life is all about;  we come under spiritual influences that cloud our minds. We listen to a buddy at work or a brother we respect, and our faith is quelled; we read a compelling book or watch a viral video, and the argument presented seems so persuasive. Without ever exploring valid alternatives, we accept a lie and faith is dislodged. There is an enemy, and he seeks to deceive and devour.

So, which of the ten is most dangerous to your relationship with God?  Which has tempted you to “draw back” from faith in Jesus?   I think Tom Green’s list is very enlightening.  Sadly, it is also very true.   Is today the time when you reaffirm your commitment to God?  Why not stop now and say a prayer reaffirming your love of Jesus?
click here to view other July Daily Meditations