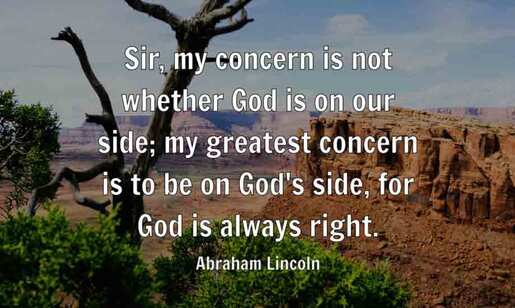 When David came up against Goliath with only a slingshot and a few stones, I’m sure there were many who wondered at David's sanity. When Shadrach, Meshach, and Abednego were thrown into the fiery furnace, the soldiers who were present probably determined that the three men were doomed.  When Daniel was thrown into the lion’s den, Nebuchadnezzar had already predetermined Daniel was going to die.  When Jesus died on a cross, I’m sure the Jewish authorities presumed their plans to silence Jesus had succeeded.   God’s chosen people in each these situations succeeded wildly!  They overcame unbelievable odds and overwhelming evil forces.  You don’t go up against God.  You can’t win against God’s chosen ones when they stand with God!  When God is for you, “who or what can be against you”?  (Romans 8:31).  When God is leading you, the forces of evil cannot win.  You may suffer in the short term, but God will win out.  Those who stand with God always stand with the Victor!

“The choices you make reveal the convictions you embrace.

After King Nebuchadnezzar had gathered all his leaders to the dedication of his golden image, he issued a proclamation that at the sound of his orchestra they were to fall down and worship the image. Those leaders were the most influential and respected people in Babylon, so you might expect them to be people of strong convictions and personal integrity. Sadly, that was not the case, and with only three exceptions they all lacked the courage to say no.

Granted, punishment for disobeying the king’s decree would be severe indeed. But even the threat of a fiery death could not intimidate Shadrach, Meshach, and Abednego. Instead, it simply revealed the depth of their commitment to God. That’s what makes them such remarkable role models. As young men barely twenty years old, they demonstrated tremendous courage and conviction.

Each day Christians face considerable pressure to compromise spiritual integrity and to adopt standards of thought and behavior that are displeasing to the Lord. Young people especially are vulnerable to negative peer pressure and intimidation. Shadrach, Meshach, and Abednego show us that young people can be spiritual leaders who are strong in their faith and exemplary in their obedience. May that be true of you as well, regardless of your age.”  (John MacArthur, Strength for Today)

Have your choices declared you are on God’s side?  Who or what can stand against you for long when you stand with God?

A man from a town in Indiana was cited by police for taking inappropriate pictures of a teenager.  The man subsequently lost his job and was ostracized.  His name was dragged through the mud.   His children were teased relentlessly at school.  He was kicked out of his church.  Why had he taken the pictures of the young boy in underwear?  It came out in court that the man, a counselor for teens, had taken pictures of bruises on the young boy who had been beaten by his father.  The pictures were later used to finally convict the father of a decade of abuse.  The father had previously used his influence to not only keep the abuse quiet but also to attack the man who had taken the pictures. Teachers at the boy’s school praised the man’s actions. A court case proved his innocence.   But it was too late.  The man and his family had been forced to move and could not move back to that town in Indiana.   The abusive father thought he had won a victory by forcing the man to move from the community. In the end, he could not run from the pictures that the heroic counselor had taken to protect the young boy.  To this day, many in that small town of Indiana have great respect for that counselor's name.

If God is for you, who can stand against you?

Many Germans in World War 2 wore belt buckles that were imprinted with the words “Gott Mit Uns”, God with us.  When the Germans lost in World War 2, many people questioned whether God failed the Germans.   In the end, a pastor said it best, “God did not fail the Germans.  The Germans failed God.   They did not align themselves with God; they aligned themselves with Adolph Hitler.  That was their mistake, their sin.”  For God to be “for us”, we have to align ourselves with God.  Then, it won’t matter what befalls, God will take care of the results and consequences and future.

Are your actions aligned with God?  Do you have the courage to stand up for what is right knowing that God is for you?   Will you remain firm in your faith when things go poorly because God is for you?  If your eyes and purpose and conviction remain firmly focused on following the will of God, don’t be surprised when God stands with you despite whatever befalls you.   Friends may fail you. Family may turn against you.  The police may arrest you wrongly.   Believers may chastise you.  But when you are fulfilling God’s will, God is for you even when everyone is against you.
​
Be of good courage.  Hold fast to that which is good.   Do not back down from what is right in the eyes of God.   In time, you will be vindicated.  The world will be shown that God was for you from the beginning!