“Therefore encourage one another and build one another up...” (1 Thessalonians 5:11, ESV) 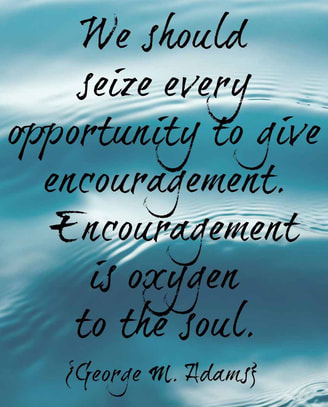 When writing to the Christians in Thessalonica, the Apostle Paul included many words of encouragement.  Paul mentioned how the Thessalonian Christians received the gospel with joy.  He was thankful for their faith in his prayers.   He was thrilled with the wonderful welcome the apostles had received.   Throughout the letter, Paul gave encouragement and shared his joy at the faithfulness and warmth of those Christians.   Near the end of his letter, Paul mentioned all Christians should “encourage one another” (1 Thessalonians 5:11).  Paul expected followers of Christ to “build up” others in the faith.  Paul wanted Christians to be a blessing for each other, to rely on one another, to love one another, and to be accountable to one another.   That is why he wrote the words contained in the scripture for today.

Though the Thessalonian Christians had been welcoming and open in their exchanges with him, the Apostle Paul still reminded them to “encourage one another and build one another up”.  If they were already doing this, why did Paul mention it?  I believe that Paul wanted to emphasize the importance of their keeping this welcoming tradition alive.  Paul knew that some of the other churches, notably the church in Corinth, were wracked with jealousy, envy, strife, and bitterness.  The Corinthian church suffered from one church fight after another.  They fought about who had more faith, which spiritual gifts were better, and who was more important in the church.  The Thessalonian church didn’t have those problems.  Still, it was better to warn the Thessalonian Christians to remember to encourage one another and build one another up rather than to see these important virtues cast aside or torn asunder.  Did you know that these two churches were only three hundred and fifty miles apart?   Today, you can drive from one city to another in a car in only 6 hours.  Paul did not want the mess in Corinth to migrate to the church in Thessalonica.  He wanted them to remain a loving and welcoming and encouraging community.

As a pastor for three decades, I have met with hundreds of pastors and thousands of laypeople.  Throughout my many discussions about church life, I have found that many churches have problems with encouragement.  The pastors and laypeople I talked to often mentioned parishioners who tore others down instead of building each other up.   As an example, a pastor I recently had the pleasure of interviewing told me that his church was totally unlike any he had ever served.  I asked him what was so different in his new church.  He smiled and said, “This is the first church I’ve ever been in that cared deeply about the welfare of its pastor and people”.

Is it so unusual to have a church that is full of encouragement, where people look out for one another?  I guess so.  Sadly, too many churches are like Corinth.  They are filled with people who fight with one another over doctrine, faith issues, spiritual gifts, and theology.  Too few churches are like the one in Thessalonica, filled with encouragement and a deep care for one another.   One might also infer that today there are more church people who act like the Corinthian Christians.  They fight and debate.  They nitpick over small issues.  They are more concerned with pomp and appearances.  They lack love.  There are too few Christians today resembling the Thessalonian Christians, who are quick to encourage and support others in their community.

Once during Queen Victoria’s reign, she heard that the wife of a common laborer had lost her baby. Having experienced deep sorrow herself, she felt moved to express her sympathy. So, she called on the bereaved woman one day and spent some time with her. After she left, the neighbors asked what the queen had said.  “Nothing,” replied the grieving mother. “She simply put her hands on mine, and we silently wept together.”

When was the last time you brought comfort to another Christian in need?  How often have you held the hand of someone who is suffering or in tears?

I have found that the most effective Christians are those willing to put aside their own issues to encourage and comfort others.  They are willing to set aside petty differences to hold the hand of one who is hurting or offer a shoulder to lean on in a time of need.  Would this describe you?  Do people feel comforted in your presence?   Would a friend in need feel safe coming to you for help?

In the 1960’s, Father Peter Scholtes was very inspired by the words of Jesus in John 13:35.  In that verse of the Bible, Jesus told his followers that true disciples will be known by their love.  He then penned a famous hymn using his inspiration.  Today, that hymn is sung all over the globe commemorating Jesus’s words.  The verses include:  “And they’ll know we are Christians by our love, by our love.  Yes, they’ll know we are Christians by our love!”
​
Do people know you are a Christian by your encouragement and love?  Do your words tend to build others up or tear them down?  The Apostle Paul was convinced that Christians need to encourage one another and build one another up.  I am hoping you are living proof of that conviction.