“And behold, Boaz came from Bethlehem. And he said to the reapers, “The LORD be with you!” And they answered, “The LORD bless you.” Then Boaz said to his young man who was in charge of the reapers, “Whose young woman is this?” And the servant who was in charge of the reapers answered, “She is the young Moabite woman, who came back with Naomi from the country of Moab. She said, ‘Please let me glean and gather among the sheaves after the reapers.’ So she came, and she has continued from early morning until now, except for a short rest.”” (Ruth 2:4–7, ESV) 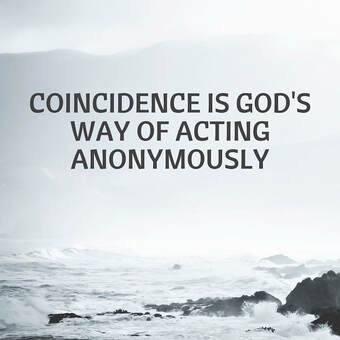 Every now and then I hear the phrase, “What are the chances of that!”   Usually it is said when something unusual happens in a person’s day, like when a series of amazing coincidences taking place.  While I do believe there are many coincidences in this world, I do not believe all events are mere coincidence. Some of those special events are, in fact, works of God’s hand.  They are divinely inspired miracles.   They are the inspired work of Almighty God breaking into our world to accomplish something so very important.

“While waiting in a cemetery to conduct a funeral service, Charles Simeon walked among the graves, looking at the epitaphs. He found one that arrested him....

When from the dust of death I rise,
To claim my mansion in the skies,
E’en then shall this be all my plea--
​“Jesus hath lived and died for me.”

He was so impressed with that gospel message that he looked for someone in the cemetery with whom he might share it. He saw a young woman, obviously distressed, and called her over to read the epitaph. He took her address and visited her the next day. The home was a scene of poverty and squalor. The woman’s old mother was dying of asthma, and two little children, very dirty, were trying to warm themselves by a small fire. Simeon prayed with the family, visited them again, and found assistance for them. Later, the young woman told Simeon that she had been in the cemetery five hours and was contemplating suicide when he called her to read the epitaph. Because of his concern she trusted Christ, and the family situation was changed.” (Warren Wiersbe, Wycliffe Handbook of Preaching & Preachers, p. 217).

Charles Simeon had no knowledge that this woman was suicidal, yet he stopped her suicide.  He had no clue that she needed to see that epitaph on the tombstone, but he just happened to show her the writing.  Were the events coincidence?  Some would say they were.  However, I have found that coincidences seem to occur more often with people of God.  I believe this is because they are being divinely inspired to do or say something at the perfect moment for something holy to occur.   It takes faith to envision the meaning behind some of these surprising coincidences.   But, once you have faith, a surprising share of coincidences indicate that God is more active in this world than many comprehend.

In the scripture for today, a godly man named Boaz was overseeing work in his fields.   It was the time of the year when the poor and needy were gleaning the extra crops from the fields so that they would not go hungry.   As Boaz eyed the needy and his own workers gathering in the fields, he greeted them with a blessing, “The Lord be with you!” (Ruth 2:4).  With this enthusiastic blessing, it is obvious that Boaz was thrilled that so many people were able to be fed with the crops that had been grown.  He did not seem to mind the presence of the needy.   When his eyes fell upon Ruth, however, Boaz didn’t recognize her.  Rather than approaching her with questions, he asked his workers about her identity.   They explained that she was “a young Moabite woman who came with Naomi”.  This helped Boaz to recognize her place in the community.  As a further explanation, the workers further described how Ruth hardly rested as she toiled many hours in the fields that day.  (Ruth 2:7).

This random meeting in the fields by the landowner and one needy woman may not seem like much.  In a book, it might garner just one paragraph as an aside.  However, this meeting of Boaz and Ruth was not coincidence.  Their meeting that day changed history.  Boaz ended up marrying Ruth.  One of their great-grandchildren was King David. One of their descendants was Jesus Christ.   One seemingly random meeting between two people in a field one day changed the course of the world.  If you read more of the book of Ruth, you can see further evidence how God had a hand in their meeting that day.  It was not mere coincidence that they ended up together.

Your life will no doubt have events shaped by the hand of God.  You might be tempted to label a lot of unusual events as coincidences.  Don’t be so sure.  God may be actively working in unexpected ways to which you are clueless.   Hebrews 13:2 explains that impromptu events in your life may be caused by angels of which you are completely unaware.   When God acts, HE doesn’t usually put up a sign that says, “God was here!  Take notice!”   That does not mean you shouldn’t look further and examine the meaning behind some of the coincidences in your life.  Might some exhibit more clearly the intent of God?

Don’t be tempted to see every coincidence as a sign from God.  On the other hand, don’t ever assume that God is not behind some of those unusual turns of events in your life.  Since God is alive and active in your world, HE may indeed affect circumstances beyond your control.   His hand will be behind some incredibly significant moments of your life.   Of that, you can be certain.
​
Have you noticed some coincidences in your life lately?  How might God have used a few to shape your situation?   Even small coincidences inspired by the hand of God will usually have huge impacts upon your life.