“For ever since the world was created, people have seen the earth and sky. Through everything God made, they can clearly see his invisible qualities—his eternal power and divine nature. So they have no excuse for not knowing God. Yes, they knew God, but they wouldn’t worship him as God or even give him thanks. And they began to think up foolish ideas of what God was like. As a result, their minds became dark and confused. Claiming to be wise, they instead became utter fools.” (Romans 1:20–22, NLT) 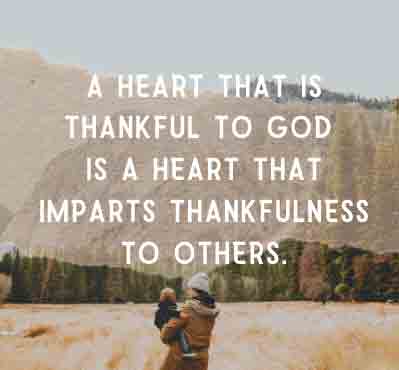 “It is gratitude that prompted an old man to visit an old broken pier on the eastern seacoast of Florida. Every Friday night, until his death in 1973, he would return, walking slowly and slightly stooped with a large bucket of shrimp. The sea gulls would flock to this old man, and he would feed them from his bucket.

Many years before, in October 1942, Captain Eddie Rickenbacker was on a mission in a B-17 to deliver an important message to General Douglas MacArthur in New Guinea.  But there was an unexpected detour which would hurl Captain Eddie into the most harrowing adventure of his life. Somewhere over the South Pacific the Flying Fortress became lost beyond the reach of radio. Fuel ran dangerously low, so the men ditched their plane in the ocean. for nearly a month Captain Eddie and his companions would fight the water, and the weather, and the scorching sun. They spent many sleepless nights recoiling as giant sharks rammed their rafts. The largest raft was nine by five. The biggest shark...ten feet long. But of all their enemies at sea, one proved most formidable: starvation. Eight days out, their rations were long gone or destroyed by the salt water. It would take a miracle to sustain them. And a miracle occurred. In Captain Eddie’s own words, “Cherry,” that was the B-17 pilot, Captain William Cherry, “read the service that afternoon, and we finished with a prayer for deliverance and a hymn of praise. There was some talk, but it tapered off in the oppressive heat. With my hat pulled down over my eyes to keep out some of the glare, I dozed off.”

Now this is still Captain Rickenbacker talking...”Something landed on my head. I knew that it was a sea gull. I don’t know how I knew, I just knew. Everyone else knew too. No one said a word, but peering out from under my hat brim without moving my head, I could see the expression on their faces. They were staring at that gull. The gull meant food...if I could catch it.”

And the rest, as they say, is history. Captain Eddie caught the gull. Its flesh was eaten. Its intestines were used for bait to catch fish. The survivors were sustained and their hopes renewed because a lone sea gull, uncharacteristically hundreds of miles from land, offered itself as a sacrifice. You know that Captain Eddie made it.

And now you also know...that he never forgot. Because every Friday evening, about sunset...on a lonely stretch along the eastern Florida seacoast...you could see an old man walking...white-haired, bushy-eyebrowed, slightly bent. His bucket filled with shrimp was to feed the gulls...to remember that one which, on a day long past, gave itself without a struggle...like manna in the wilderness.”
(“The Old Man and the Gulls” from Paul Harvey’s The Rest of the Story by Paul Aurandt, 1977, quoted in Heaven Bound Living, Knofel Stanton, Standard, 1989, pp. 79-80)

Eddie Rickenbacker knew what it was like to be desperate, to be hungry and thirsty, to be in need, to be in doubt, to be lost.  When he found himself in an almost hopeless situation, he turned to God.  He prayed.  He reached out for help and was saved.  In response, Rickenbacker was filled with gratitude to God and to the seagulls.  He never forgot the gifts he was given when his situation was so desperate.  Sadly, many people do not give thanks when God comes through. They do not realize the many ways God has blessed their life and situation.  Does it take a desperate life-or-death moment for people to realize how much God is doing and how much God cares?  Does it take a near-death experience for a person to be grateful?

The apostle Paul saw this among people in his day.  In the first century AD, Paul wrote that “since the world was created, people have seen the earth and sky” (Romans 1:20).  They have witnessed God’s wondrous creation.  Despite being able to “see clearly God’s power and divine nature” (Romans 1:20), many people have decided not to “worship God or give Him thanks” (Romans 1:21).   People just took blessings for granted.

You are of a different caliber of person.  You have seen God’s wondrous works.  You have felt God’s presence in your life.  Hopefully, your heart and soul and mind are filled with thanks for God’s great gifts.  Hopefully, your being is full of gratitude for God’s mercy, grace, and love.   Your prayers are filled with thanks, aren’t they?  Your soul feels gladness at the reminder of Jesus’ love.   Does your heart ever bubble-over with affection for the God who saved you?

In the past twenty years or so, I’ve noticed that fewer and fewer people actually give thanks around the time of Thanksgiving.   Among some liberals, there is even a hatred for the history of the pilgrims and Indians gathering before their first winter together.   The liberals talk about racism and the hatred of indigenous peoples.   Their view of the past is jaded and full of resentment.  Sadly, like those in the days when Paul wrote Romans, many do not give thanks for God’s provision.  They can’t find a reason to be grateful for God’s love.  Some schools no longer spend any time during November understanding Thanksgiving traditions.   Because of this, some students grow up with no traditions involving giving thanks, let along giving thanks to God.

As I sat in a restaurant booth, a man sat with his teenage son in the booth across the way.  I figured it was the young man’s birthday, because there was a small present in the corner of their table.  After the meal, the young man opened the present.  Inside was an old, worn pocketknife.  As the boy looked at the knife, his father said, “This belonged to your grandfather.  Before he died, he gave it to me.  Now, I want to give it to you.  You mean a lot to me, and I want you to have it.”  The boy said, “Ok, I guess.”  Then, he put the knife in his pocket and looked out the window.  There was no “Thank you!” from the boy.  There was no real, visible understanding of the importance of the gift that the father was bestowing upon his son.  It was such a sad moment for me to witness.  Without gratitude in the son’s attitude, the moment was only filled with a sad appreciation for what had just happened.
​
Over the next few days, find things to be thankful for.   Take time to say “Thank you” to others and to God.   Others may forget to give thanks.   You won’t forget, will you?
click here to See november Daily Meditations