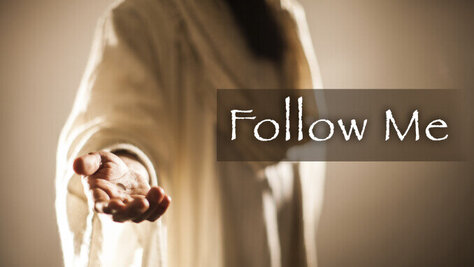 In a classroom, the teacher asked her students, “Do you want to be a leader or a follower?”  All the children in the room responded, “Leader!”  The teacher looked proud.  She had taught them to be an example for others, to lead with confidence, to envision authority.   Sadly, she forgot to teach them how to be good followers!  She also never really taught them that there are some seasons in life where it is best to follow in the path of a great leader.  Following isn’t bad.  Following isn’t wrong.  Following may be the best way to grow or learn or understand.  Following is even required in some situations.  For example, it is best to follow God!

The scripture for today contains Jesus’ words about His followers, the sheep of His flock.  When some Jews gathered around Jesus to hear His teachings, Jesus explained that those who believe in Him are like sheep in His flock.  They follow their shepherd, Jesus.  Those sheep “hear Jesus’ voice” (John 10:27).  Like any good shepherd, Jesus knows His sheep well.  He knows their tendencies, their weaknesses, their hurts, their strengths.   Then Jesus mentioned one further thing about those who believed in Him:  “they follow me”.   Like good sheep in the fold, good believers know to follow Jesus.  They follow His voice.  They listen to His instruction.  They trust His leadership.  They know intrinsically that following the Good Shepherd means the difference between life and death.  With the Good Shepherd, they are safe and protected and watched over.

Did you notice that those who believe in Jesus, according to this verse, know to “follow” Him.  They do not take the lead over the flock.  They are smart enough to know that Jesus is the shepherd.  They don’t mind being the sheep. Their purpose in life is to follow Jesus’ voice and heed His instruction.  Any sheep that fail to follow will soon find themselves in danger.   When they stray away, the wolves who constantly watch for weaknesses in the flock will be thrilled to take them.  The sheep are only safe as long as they follow the shepherd, listen for His instruction, and Heed His voice.

At a town meeting in Wisconsin, a public gathering was held to discuss problems with water quality and sewer issues plaguing the area.  Recent water testing found lead and arsenic and several other contaminants making it through the filtering process and into people’s drinking water.  Many authorities were invited to attend the meeting including members from the State Committee on Water Quality, Environmental Protection Agency agents, the Mayor, the Governor, area pastors, business owners, and many more.  Everyone came to find out what the town was going to do about the problem.

After the results of the latest water testing were given, a politician stood up to complain that not enough taxes were being spent on water testing.  An FDA official came forward to complain that he hadn’t been consulted.  The mayor explained that his committee had been working hard to alleviate the problems.  After a short while, shouting came as a federal employee blamed county leadership for certain procedures that he believed led to the problem.  Local officials blamed area corporations for pollution.  Two politicians argued over whether the other’s party was partly responsible.  As the meeting degenerated into arguments and accusations and finger-pointing, an American Indian leaned over to the man next to him and said, “The biggest problem here is there are too many chiefs and not enough Indians!”

The American Indian was correct.  So many of those in attendance at that meeting cared more about shoring up their own leadership than coming up with solutions to the problem.  They were more interested in pointing fingers at others than following the recommendations of those with more knowledge in the matter.   Everyone wanted to be the leader.  Too few wanted to follow the recommendations presented.

In our “modern” times, people don’t like to follow.  They are so intent on being the leader that, even when lacking ability, they only want to be the one in charge.  Sadly, this arrogant need to always be the leader has infiltrated the church.  Even among the faithful, fewer and fewer good followers can be found.  Steven V. Roberts wrote some interesting words to this effect a few decades ago.  Here’s what he found:

“In this Age of Self, the language is filled with phrases that glorify personal choice above all other values: self-determination, self-knowledge, self-esteem, self-help even do-it-yourself. In this climate, no doctrine is safe, no dictate accepted without scrutiny....The touchstone of belief today is the individual, not the institution. Priests, like precinct captains, have lost authority. The same voters who talk back to their political leaders on call-in shows and town meetings are talking back to their religious leaders at parish council meetings and Communion breakfasts. While 85 percent of American Catholics look up to the pope as a moral leader, 4 out of 5 say they follow their own conscience, rather than papal authority, on moral questions...The phrase “cafeteria Catholics” describes those who pick and choose among church teachings. But in religion, as in politics, the more appropriate analogy for modern mores is to fast food rather than to cafeterias; as the slogan for one hamburger chain puts it: “Have it your way.”...How do leaders lead when followers don’t want to be led?”  (“Leading the Faithful in an Age of Dissent,” Steven V. Roberts, U.S. News and World Report, August 23, 1993, p. 6)

Jesus wanted true followers.  Sadly, even some in the pews don’t want to follow Jesus’ authority.   They question Jesus’ words.  They twist scriptures to fit their own understanding.  They refuse to follow Jesus’ voice and confront their own sin.  They are often too prideful to remain quiet and listen for the voice of Jesus instead of trying to run their own or another’s spiritual life.   When the pastor or the Bible disagree with these people, they don’t follow Jesus’ words with respect.  Instead, some have resorted to rewriting the Bible to fit their own doctrines.  Others complain how the Bible is outdated and needs to be re-interpreted for modern ears.

Are you among the true followers of Jesus?

Do you follow Jesus’ voice even when it doesn’t make sense to you at the time?

Are you willing to be corrected by the Lord?

Do you struggle with following some of God’s commands?

Jesus was proud of those in His flock who actually listened for His voice and followed His authority.  I pray you are numbered among the faithful in the fold.