“Humble yourselves therefore under the mighty hand of God, so that he may exalt you in due time.” (1 Peter 5:6, NRSV) 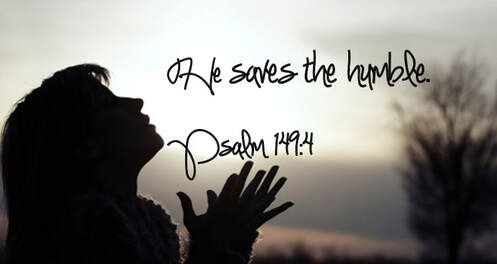 Humility is not just something that God notices.  It is a virtue that God extols.  It is a character trait that God not only sees as fitting for a faithful person but is blessed.   While God sees humbleness in such a positive light, the world sees the exact opposite.  In the world you are told such things at “never back down”, “put yourself out there”, and “the squeaky wheel gets the grease”.  Each of these worldly sayings promotes the notion that you need to be not only noticed but openly pointing constantly to yourself and your accomplishments to get ahead.

The church and church people often fall into a similar worldly view that humbleness is a weakness.  In interviews with pastoral candidates, churches will often choose the pastor who seems more accomplished, polished, and open.  They see pastors who are quiet and capable as weaker or less prominent.   I have even heard pastoral committees tell me that a pastor should not “waste time” in “too much prayer”.  They saw the pastor who was popular in the community as the best pastor.  They saw the pastor who was a “go-getter” as a real worker.  A pastor who prayed earnestly was seen as lacking professional muster.

The scripture for today sets up a different standard for all the faithful with regards to humility.  Peter wrote that the godly need to “humble themselves under the mighty hand of God.”  They must be willing to give God the credit for HIS work.  They do best to show honor and reverence to the Almighty.   You might think this is “normal operating procedure” for Christians.  Not in many cases!    I’ve seen Christians who lauded their work on church committees for the success of a project. They have promoted church projects in the community more than promoted God.   Many have extolled workers in the church who “got the job done” even if the workers were only doing God’s will.   Humility means not taking the credit for God’s work.  It denotes a lack of self-promotion, self-importance, and pridefulness.   I find it very curious that this scripture mentions that when one humbles him or herself under God’s mighty hand, “in due time” they are exalted by God.   It may take time for humble ones to receive God’s blessing for their humility.  BUT you can be sure, God notices the presence of their humble character.

In a small church in rural Nebraska, the people had a difficult time making the budget each year.  The church community was made up mostly of farmers, farm hands, and small-town workers.   In truth, there was only one well-off family in the church.  Sometimes, that family would give a little extra so the church would meet its budget or so that a mission work could be accomplished.  After several years, the pastor grew to appreciate that wealthy family and their generosity.

Four years into that pastorate, the sound system began to falter.  Some Sundays, the amplifier wouldn’t turn on.  During several special occasions, the speakers hissed when the speakers changed.   At one funeral, the system squealed so loud it interrupted the flow of the worship.  The sound system was thirty-five years old and due for replacement.

The worship committee of the church researched replacements for the sound system but found out that the investment in new equipment would come to roughly eighteen thousand dollars.  The committee debated for months what kind of equipment might be needed, how to raise the money needed for replacements, and what upgrades might be helpful.   After spending no less than five months debating the issue, the committee decided to drop the purchase of new equipment.  Why?  For some inexplicable reason, the sound system stopped acting up.  A few people in the church surmised that the wealthy family had purchased some new equipment or paid to have someone fix it.    The pastor was convinced that something had happened but chocked it up to God’s blessing.  The church would not have to go into debt to replace the system!

After ten flawless years of operation, the sound system began to act up anew.  The worship committee took up the task to find a replacement system all over again, working out how to raise the funds, and exploring what upgrades might be needed.   At one committee meeting, the pastor explained how well the system had been functioning for the past ten years.  He told the committee that it was a blessing that God had taken care of the problem.  One member of the committee then said, “And that blessing from God came in the form of one John H. Hunter.”   What the pastor nor any other member of the church or committee knew for the past decade was that John Hunter, who used to be a Navy Technician during the Korean War, took it upon himself to rebuild and revamp the sound system ten years before.  John Hunter saw it as his contribution to the smooth running of the church.  The only reason that the sound system started acting up again was that John had died the previous summer.

For ten years, John H. Hunter took care of his church’s sound system flawlessly.  He saved the church thousands of dollars.  He made worship services enjoyable again.  People could hear the pastor’s sermon so much more clearly.  The Christmas program never sounded better.   It was due to John’s hard work and dedication.   But only one person knew it!   John didn’t do it for the accolades.  He did it for the Lord.  He didn’t do it so that people would owe him or give him a pat on the back.  He did it as a gift of love.  When the new sound system was installed just before Christmas that year, a small plaque was affixed to the wall nearby in dedication to the “love and devotion of a beloved member who made sure that everyone could hear the good news of the gospel of Jesus Christ” in that church.  By the way, the plaque was given anonymously!  Sounds like another in that church is willing for God to get the glory!

There are Christians who have made an art form out of being extolled for their accomplishments in the church.   Their gifts or work will often come with strings attached that require they get due recognition for their work.  Jesus called people who “loved to be seen” for their accomplishments, “hypocrites”.  In Matthew 6:5, Jesus explained that those who love to be seen publicly for their religious devotion “have received their reward”.   Others have noticed!   Today’s scripture mentions that the humble will receive their reward “in due time”.   Others may not notice the work of the humble, but God will bless it greatly.
​
Do you like to be noticed for your good works?  Lay aside that desire!   It’s the humble that God notices and blesses.  Don’t seek to be noticed by others for your deeds.  Give the glory to God where the glory belongs!   Your reward will come one day soon.  Today’s scripture promises that God will remember your efforts completed in all humility.  God will remember when HE got the credit.  A book in heaven is right now recording such efforts done in humility (Revelation 20:12).  This book is with God in Heaven.  Its words will last forever.  Its secrets will one day be revealed. ​
click here to See september Daily Meditations