For Those Desiring a Deep Christian Faith...
This website is being developed by Rev. Dr. David Ambroso

A few bits of info about Pastor Dave.....

He is married and has two adult children.
He is very much in love with his wife of 33 years.
He has been a Licensed or Ordained Pastor for 32 years.
He has served God and churches in Missouri, Indiana, Wisconsin, and North Carolina.
He has earned a Bachelor of Arts degree from Lakeland College, Sheboygan, WI; a Masters of Divinity degree from Eden Theological Seminary in St. Louis, MO; and a Doctorate of Ministry degree from Eden Theological Seminary, St. Louis, MO.
He has served or volunteered in hundreds of inner-city missions, food pantries, homeless shelters, and a variety of other outreach programs.
To date, he has helped establish 4 homeless shelters, and 3 food pantries in 3 states.
He has organized and led various youth mission trips in Georgia, Virginia, South Carolina, North Carolina, Wisconsin, Minnesota, Missouri, Illinois, and Ohio.
He has been active in a variety of ways with missions in Honduras, Belgium, Thailand, China, and Africa.
He has been a Camp Counselor for Youth, a Chaplain at a Nursing Home, and a Hospital Chaplain.
He has been specially trained through advanced classes set up by Mayo Clinic and other educational organizations to help soldiers with PTSD .
He has led more than 200 weddings and thousands of hours of marriage counseling.
He has worked with many health professionals through the years to help those suffering from depression, bi-polar disorder, OCD, ADD, ADHD, and more.
Because of damage to his nervous system from a parasite that invaded his body while on a mission overseas and the resulting spinal damage, he is now permanently disabled.
He has had 5 back surgeries in various attempts to save his nervous system and spine from damage.
He is very thankful to doctors and staff at Duke University Medical Center and the Neurospine Center of Wisconsin, as well as the Neurosurgeons and physicians who helped save his life.
​He has a great love for his dogs, especially Charley, a German Shepherd who was obtained through a rescue program.

​(below, Dave works on the web site from his in-home hospital bed on a "bad day" while Charley keeps him company!) 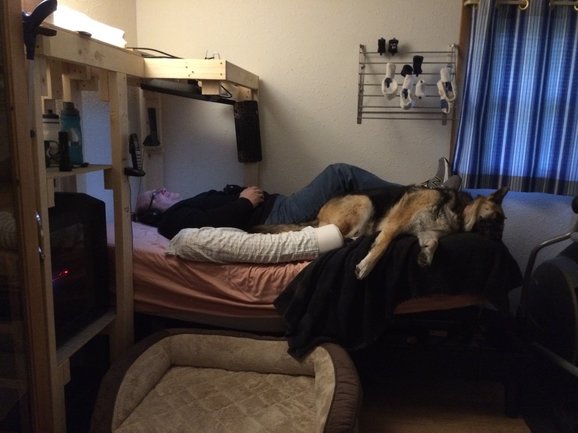