Is Wealth Damaging Your Faith? 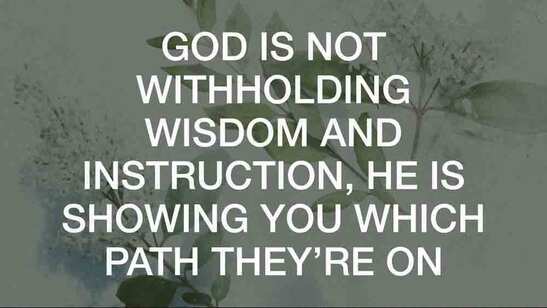 “That night God appeared to Solomon and said, “What do you want? Ask, and I will give it to you!” Solomon replied to God, “… Give me the wisdom and knowledge to lead them [Israel] properly, for who could possibly govern this great people of yours?” God said to Solomon, “Because your greatest desire is to help your people, and you did not ask for wealth, riches, fame, or even the death of your enemies or a long life, but rather you asked for wisdom and knowledge to properly govern my people—I will certainly give you the wisdom and knowledge you requested. But I will also give you wealth, riches, and fame such as no other king has had before you or will ever have in the future!”” (2 Chronicles 1:7,10–12, NLT)


Solomon was the son of David and Bathsheba.  He grew up with famous parents.  His family had wealth and success.  His future looked bright.   When Solomon was chosen to be the next King of Judah, God appeared to Solomon in the night asking, “What do you want?  Ask and I will give it to you! (2 Chronicles 1:7).   Part of me wonders if this wasn’t a test by God of Solomon’s faith.

​  To state your greatest desires or wants exposes your innermost thoughts.  It explains your hopes and wishes and dreams.  It reveals your greatest aims in life.  Solomon asked for “the wisdom and knowledge to lead Israel properly” (2 Chronicles 1:10).  God was very pleased with Solomon’s response.  Solomon could have chosen “wealth, riches, fame, or the death of his enemies” (2 Chronicles 1:11).  He did not.  By asking for such wisdom and knowledge, Solomon displayed great humility as a king.   God not only granted him extraordinary wisdom and knowledge, but God also blessed him with wealth and riches and fame and more.  Solomon went on to lead Israel into greatness.  In fact, the temple in Jerusalem was originally designed and built during the reign of Solomon!

However, even Solomon’s wisdom and knowledge did not stop him from committing sin before God.  When his riches attracted foreign attention and respect, Solomon began to engage in some shady political moves.  When Solomon’s power and authority became widely respected in the Middle East, countries such as Egypt and Lebanon and Syria began to negotiate special privileges with him.  Some of these political maneuvers involved Solomon marrying foreign wives and receiving foreign wealth.   Despite all of Solomon’s wisdom and knowledge, the wives and riches and fame and foreign influences undermined Solomon’s leadership and ethics and values.

Very few people can handle wealth and power and fame.  One has only to look at what often happens to powerful people in Washington, D.C. for examples.  Look at how Hunter Biden, son of President Biden, has wrecked his life with cocaine and various affairs and shady business practices.   Look at the famous people in Hollywood.  How many of them have died from drug overdoses, became corrupt from the lavish lifestyles, or committed suicide?  How many of the world’s elite were caught traveling to Jeffrey Epstein’s Island to have illicit sex with underage girls?  Even the great and wise Solomon in our Bible could not deal with the corruption caused by greatness.

After studying this story of the life of Solomon, John D. Barry made the following observation:
““What would you do if you won the lottery?”

This question always seems to generate the same responses: There’s the person who devises an investment strategy, the dreamer who envisions ending global poverty, the individual who would travel the world, and the person who would buy the house, boat, or car they’ve always wanted.
These responses tell us something about each person’s character and what fulfills them. The root of these desires reveals something about how they perceive their identity in relationship to their culture, family, and God.

What would you do if you came into a large sum of money? How can you align your desires with God’s?” (From Connect the Testaments, June 1 reading).

While teaching His disciples, Jesus mentioned a rich man in one of his parables.  The man had become rich through careful planning and luck and the blessing of God.  After he became rich, what did the man do?  Did he share his wealth with the needy?  Did he devote resources and time to helping widows and orphans?  The rich man decided to “eat, drink, and be merry” (Luke 12:19).  God was so disgusted at the man’s “covetousness” and greed that God ended his life the very night he decided to spend all his wealth on himself.  God called him a “fool” (Luke 12:20).  Based on Jesus’ parable, foolish people use their money, wealth, and fame selfishly.   This selfish living is reprehensible to God.

An easy life, wealth, riches, and fame may corrupt even the most dedicated of souls.   That is why Jesus said it is easier for a camel to pass through the eye of a needle than a rich man to gain entrance to Heaven.    Be careful in your life to never become selfish.  Don’t take your blessings for granted.  It is so easy to lose your way in life when pretty things or wealth cause you to leave the path of righteousness.  If you ever find your life is becoming easier or your wealth is increasing, be aware that you are traveling into dangerous territory.  These things have corrupted many souls.  They have the possibility of choking your faith and wrecking your relationship with God (read carefully Mark 4:19).

Our scripture for today began on such a high note:  Solomon chose God's wisdom and knowlege over all other things. By his choices that day, Solomon exhibited great faith!  Sadly, Solomon was corrupted in his lifetime by the love of worldly treasures.  You also have made some very worthy and faithful choices in your life.   Please don't let the love of worldly treasures taint your spiritual life in like manner!