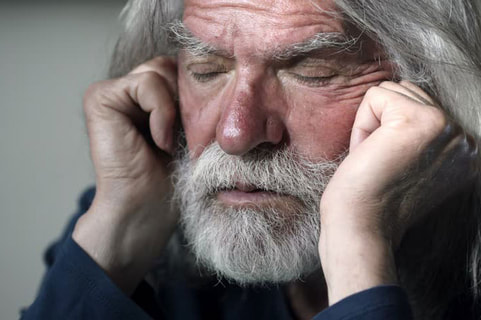 “They sent the beautiful robe to their father with this message: “Look at what we found. Doesn’t this robe belong to your son?” Their father recognized it immediately. “Yes,” he said, “it is my son’s robe. A wild animal must have eaten him. Joseph has clearly been torn to pieces!” Then Jacob tore his clothes and dressed himself in burlap. He mourned deeply for his son for a long time. His family all tried to comfort him, but he refused to be comforted. “I will go to my grave mourning for my son,” he would say, and then he would weep.” (Genesis 37:32–35, NLT)


​Grief and sadness and mourning, like that suffered by Jacob in the scripture above, can be debilitating.  They can make you not want to get out of bed in the morning. They can cause suffering of body, mind, and soul.  Many people do not realize the depths to which the body suffers when your heart gets broken.  The suffering can actually damage your organs, disrupt your brain chemistry, and even cause death.

An author, in a book I’ve recently read, wrote the following words:  “Twice I went to the emergency room showing symptoms of a heart attack. After my second trip to the ER, my physician sent me to a cardiologist to get blood work and a stress test. The tests determined that I hadn’t had an actual heart attack (the kind that causes permanent damage to the heart muscle) but a stress-induced heart problem that causes only short-term harm.

The Mayo Clinic calls it broken heart syndrome—a temporary heart condition that is brought on by stressful situations or grievous loss. It involves a surge of stress hormones disrupting the heart’s normal pumping function. This condition mimics a heart attack by causing a similar set of symptoms, including chest pain, shortness of breath, an irregular heartbeat, and generalized weakness. When this occurs, people believe they are having a heart attack. I did—twice, in less than a year. And what I experienced is more common than I knew.”  (Paul Tautges, Anxiety:  Knowing God’s Peace, p. 11).

When you suffer from a broken heart, it will shake up your world.  A death may set it off.  The breakup of a long-term relationship would do it.   The loss of a good friend can easily make you feel this kind of suffering.  The news that you have an incurable illness may certainly set it off.  When something rocks your world, your heart and soul and mind all suffer.  They try to deal with the emotional and psychological cascade of pains.  However, spiritually, you will also go through a wrenching of the soul.  All this suffering is typified in the scripture for today.

Jacob loved his son, Joseph.  He adored the young boy.  Joseph had dreams.  He had an inquisitive mind.  He was intelligent and unafraid to stand up for what he believed.   When Jacob’s other children became jealous of Joseph, they decided to do away with him.  In the end, they sold him into slavery in Egypt.  To cover up their heinous deed, they dipped Joseph’s one-of-a-kind robe in animal blood and brought it to Jacob (Genesis 37:32).  They passed off Joseph’s disappearance as an animal attack where Joseph had been eaten.  Jacob bought the lie.  He recognized the robe and the blood.  He deduced there had been an attack.  Not wanting to face life without his beloved son, Jacob’s heart was broken.  “He mourned deeply for his son” (Genesis 37:34).  His grief was so deep that Jacob even figured he would die from the shock and trauma of the news.  Weeping, Jacob would tell his family, “I will go to my grave mourning for my son” (Genesis 37:35).

Even in the early days of the Old Testament, the people realized that a broken heart could easily take a person’s life.  Jacob didn’t think he would outlive his own grief at the loss of his son, Joseph.  Grief and loss are such overwhelmingly difficult and dangerous feelings.  They strike deep in your heart and mind and soul.  They can spawn depression and anger and insecurities and regrets and so much more to overwhelm you.  They can give your body tics, panic attacks, nausea, heart-attack like symptoms, and so much more.  That is why it is so important when you suffer a deep grief or hurt that you get help from God and those around you.

Jacob did survive the lie of Joseph’s death. In fact, he lived to see Joseph again.  God not only helped Jacob to overcome his intense grief, but God also used Joseph’s suffering to save many lives!  God turned everything around not only for Joseph and Jacob, but for all the extended family!  Even while Jacob was reeling from pain and doom at Joseph’s seeming death, God was already at work behind the scenes doing good for Jacob and Joseph and all those involved.  If you give God enough time, God can not only heal you but bless you in so many ways… even after suffering a terrible setback.

Like Jacob, people feel like giving up when terrible things befall them.   You might feel like curling up in a ball, drinking yourself silly, taking a bottle of sleeping pills, or driving a car off the cliff.  Don’t go there!  Instead, just throw yourself into God’s arms.  Lean on others.  Cry until you get it all out.  Throughout all the suffering, God will be working all around you to bring healing and love and care to you.  God will be mending that broken heart.  You may end up with scars from the situation, but God will knit together your life in a new way…  IF you don’t give up on HIM!
​
Jacob was amazed to see Joseph again.  God made that happen.  Jacob eventually was saved from famine because of Joseph.  God made that happen, too.  Joseph’s evil siblings had to face their own sinfulness. God caused that to happen as well.  Throughout this whole situation of suffering and grief, God was making things right.   On Judgment Day, God will put the whole situation to rest.  Each person involved will face the consequences of their actions.  All will be at the mercy of God’s righteousness.
​
There are some things that people can’t fix.  God can, however, heal these with HIS incredible love.  Given enough time, given eternity, God will make things right in the end.  Throughout your hard days, just know that God is working behind the scenes to make things right for you.  God is wanting to comfort you.  Someday, you will find out how much.  Someday, you will learn all that God did behind the scenes.  One day, you will know how deep is God’s love for you.
​