Does doubt haunt you? 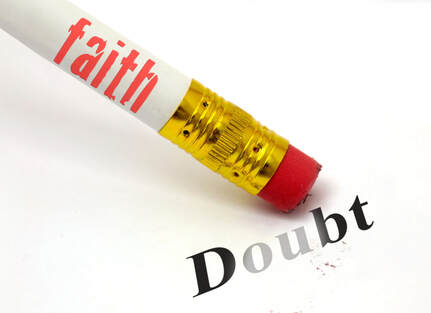 “Now the eleven disciples went to Galilee, to the mountain to which Jesus had directed them. And when they saw him they worshiped him, but some doubted.” (Matthew 28:16–17, ESV)


Just a few days before the scripture above occurred, the disciples heard about the resurrection of Jesus.  Some of the disciples even saw Jesus alive before in the days before this scripture occurred.   On this day, Jesus was ascending into heaven.  He gathered the disciples in Galilee to give them His final words and instruction.  However, just before Jesus spoke to the disciples, we are told that “some doubted”.  Some doubted the resurrection.  Some doubted Jesus’ mission, His work, His plan.  These disciples had traveled with Jesus for months and months, and now He stood before them resurrected!  How could they doubt Him?  How could they doubt what He taught and prophesied?  But they did.  That’s one thing about all humans; they have doubts.  They second-guess.  Even the best of the disciples doubted Jesus when He stood right in front of them!

I have had some very faithful Christians tell me that once they believed in Jesus and were baptized as an adult, they never once doubted Him.  I doubt that!   Every human has doubts.  It’s part of our mortality, the failure of our abilities, the fear of what we don’t know.   You will have your doubts about God, Jesus, forgiveness, hope, Heaven, and so much more.  Often, some of those doubts will occur more than others. Often, those doubts that seem to linger more often are based on your own insecurities, fears, worries, or desires.   Human frailty and weakness and mortality and thinking cause doubts to crop up often, for some they crop of daily or even hourly.  Doubts cause all of us to wake up at night with a racing heart or develop “worry lines”, or take precautions, or buy insurance.   Let’s be honest, doubts are something every human deals with.  Doubts about Jesus or Heaven or Hell or what’s right and wrong plague every faithful soul.  It’s just a part of the human condition.

It's not a question of IF you will have doubts.  You will.  The question for you, dear faithful Christian, is what will you do when those doubts arise?

When doubts plagued Judas, he betrayed Jesus with thirty pieces of silver (Matthew 26:15).  After Jesus was arrested, people began to question Peter; and Peter’s doubts caused him to deny Jesus three times (Mark 14).   Doubt caused Moses to question his calling (Exodus 4).  Doubts of his future caused Elijah to flee into the wilderness and give up when Ahab and Jezebel threatened Elijah (1 Kings 19).  Doubt caused Peter to sink into the Sea of Galilee instead of walking on water.   Doubt caused Paul to question his own abilities to overcome fleshly temptations (Romans 7).  The human conditions cause us to doubt, to question things, to second-guess the future, to fret, to fear, to have anxiety, and so much more.  Doubt is behind a lot that we think and do.

When the disciples were faced with doubt, Jesus suggested an antidote to that doubt.  He encouraged the disciples to embrace their faith when crippled with doubt.  For example, when Peter tried to walk on water with Jesus and began to sink, Jesus saved Peter but then challenged him with the words, “O man of little faith, why did you doubt?” (Matthew 14:31).  Faith is the answer to doubt.  It is the prescription, the antidote, the force that drives doubt away.   Without faith, a person sinks into doubt and is destined to falter.   A strong faith casts out doubt and fear.  When faced with a terrible storm while on a boat adrift of the Sea of Galilee that threatened to kill them, Jesus was sleeping.  Jesus had no doubt or fear.  Upon being awoken by the fear and doubt of the disciples, Jesus calmed the waters of the Sea.  Then Jesus said to the disciples, “Where is your faith?”

When you find yourself mired in a sea of doubt and uncertainty, when insecurities capture your dreams or shake up your calm, ask God for faith.   Then, bolster your courage with your faith in the Almighty, All-powerful, All-knowing God.  Your future rests in the palm of God’s hand.  Your Lord is your Savior.  Your God is an AWESOME God.  Have faith in the Lord!

The disciples knew that their faith was lacking at times.  That’s why on one occasion, they asked Jesus to “increase their faith” (Luke 17:5).  In response, Jesus told the disciples that all they need is faith the size of a grain of mustard seed (the smallest of seeds!) to move mountains.  Even small amounts of faith can cause miracles.  Even a small faith can change the world!   You don’t need to have an increased faith!  When you became a follower of Jesus and the Holy Spirit came to you, you received more than enough faith to overcome any obstacle.  You don’t need more faith; you need to exercise the faith you already have!   Even a small amount of faith will cast away all doubt.

A woman came to see me after worship.  She pulled me aside to talk privately.  She whispered, “Pastor Dave, I believe my son is marrying the wrong girl.  I don’t know what to do.  I want you to speak to him.”  I quietly whispered, “Not yet.”  She looked at me with wide eyes and I could see the anger beginning to boil.  Then, I said, “I want you to pray about this, asking God for the words to say.  Then, I want you to gird up your faith and talk to your son.  Then, if you see the need, I will come speak with him.”   I could tell she was not happy.  Still, she nodded, then went her way.

A few weeks later, I spoke to her at a committee meeting.  I asked her how things were going with her son.  She replied, “I did as you asked.  I prayed about it.  I spoke with him.  At first, I was so angry with you.  I figured you could handle this way better than I ever could.   Then, I did ask you asked, and spoke with him.  I think now that everything is going to be OK.  I think my own past was causing me to doubt his choices.”   I’m not sure, but I think she realized what I was doing.  As her pastor, I wanted her to exercise her “faith muscles”.  I wanted her to face this challenge.  I knew she needed to work through this with God and her son.   She may have resented me for a while but that’s the price I pay.   My calling by God is to equip others for service, this includes pushing them to exercise true faith.

Sometimes, when Jesus would heal, He would ask for a person to use their faith (Luke 7:50 among many other scriptures prove this!).   Faith heals.  It casts away doubts.  It causes miracles.  It changes the world.   When doubts and insecurities shake you up, exercise those faith muscles.  Trust in God.  Take the hand of Jesus. Listen to the Holy Spirit.  Your faith is more than enough to chase away the clouds of doubt and ease your fearful mind.