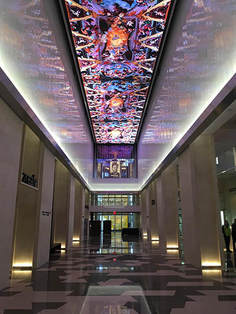 October, 2017:   A new museum dedicated to the best-selling book of all time will open next month in Washington, D.C.—just three blocks from the U.S. Capitol. The Museum of the Bible is large and impressive. With a total square footage of 430,000, the museum boasts six floors, including part of a recreated first-century C.E. Jewish village, a ballroom, a performing arts hall, a rooftop garden with Biblical plants, and a 140-foot-long LED screen on the ceiling of the museum’s lobby. It would take a visitor 72 hours to see every artifact, read every placard, and participate in all of the museum’s activities.

Chances are you’ve heard some of the controversy surrounding the Museum of the Bible in the months leading up to its opening. Rather than hide or pretend such issues don’t exist, the museum chose to address them directly. On October 17—one month before its opening day—the Museum of the Bible held a press conference featuring a panel of the museum’s leaders and academic consultants to “outline the rigorous process used to create content displayed throughout the museum and answer questions about the museum’s collection practices, some of which have been challenged.” In the first half of the press conference, the panel members addressed a variety of topics on the museum’s approach and exhibit content.

“We are not associated with any denomination,” explained Museum of the Bible vice president Steven Bickley with regard to the museum’s nonsectarian objective. “We embrace different faith traditions.”
​
“We invite people to engage with the history, narrative, and impact of the Bible,” said museum president Cary Summers.

To that end, the museum’s main exhibit space is comprised of three floors, each dedicated to the history, narrative, and impact of the Bible. 2,840 artifacts round out the museum’s collection; of these, 2,100 are Torah scrolls, said Summers.

(adapted from a Biblicalarchaeology.org article)