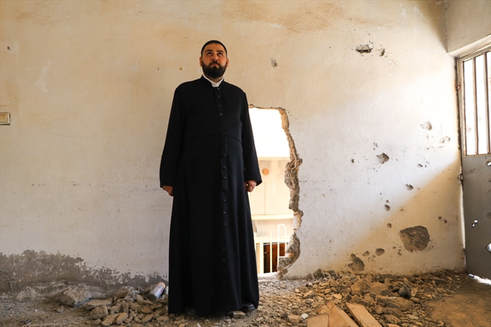 ​In the war-torn region of Bashiqa, Iraq – located near Mosul – a brightly-colored mural hovers over a mound of rubble. The drawing is of a tree, blooming with green leaves, with the inscription “Tomorrow will be more beautiful” declared in red letters beside it.

This is as fitting an image as any for the Christian church in this area, emerging from the terror of the past few years, and beginning once again to bear fruit.

“I am optimistic, yes, very optimistic,” says Archbishop Yohanna Petros Mouche. “When you look around the villages, you see that life is back again. Shops and restaurants have opened once more. I see the people are serious about returning. On Palm Sunday only three families were back in Qaraqosh, but now about 1,500 families have returned. What is happening in Qaraqosh is encouraging to people from other villages in the Nineveh Plain.”

Not that long ago it was fitting to wonder if Christianity in Iraq would be able to survive. Over the past decades the number of Christians in the country has dramatically fallen from just under 2 million in the 1990s to around 200,000 right now.
​According to one of the priests in Bashiqa, Father Poulos, “In Iraq things are never guaranteed. Our future is in the hands of God. We pray that life will be better than it was before. But we see that the Christians have become stronger because of the crisis. Every crisis makes us stronger. You see that the Church became everything for the Christians.”