“These trials will show that your faith is genuine. It is being tested as fire tests and purifies gold—though your faith is far more precious than mere gold. So when your faith remains strong through many trials, it will bring you much praise and glory and honor on the day when Jesus Christ is revealed to the whole world.” (1 Peter 1:7, NLT) 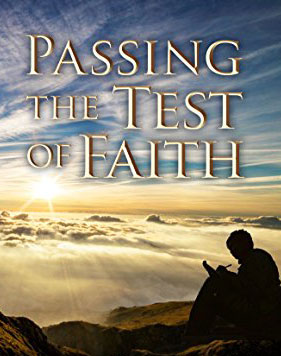 It is well known that in World War 2, the Battle of Midway changed the Pacific Theater of War.  Before that naval battle, the U.S. Navy was losing to the Japanese Imperial Navy at almost every turn.  After that battle, the Japanese Imperial Navy had a difficult time recovering.  Losing four of its best aircraft carriers, Japan had a difficult time meeting the American Navy head on later in the war.  The loss of so many veteran pilots on those carriers made it so that the Japanese pilots were at a disadvantage to the more veteran U.S. pilots.  Since 1942, most of the world sees that battle as a turning point, a battle that was well conceived and executed by the Americans.

However, there was a huge failure during that battle known as the “Flight to Nowhere”.  A group of planes flew off from the U.S. Aircraft Carrier Hornet.  They were to find and destroy the Imperial Japanese fleet that was steaming at 239 degrees west at some 80 or 100 miles.  But the flight leader from the Hornet flew at 265 degrees instead.  Because of this error, none of the planes ever saw the Imperial Japanese Fleet.  Only 20 of the 59 planes that left the carrier deck that day made it back safely.  Not one bomb or bullet were used in that flight against the enemy.  The embarrassment of that “flight to nowhere” was so significant, knowledge of it was downplayed and buried for fifty years until some of the people involved came forward to tell the truth.

The lead pilot of “the flight to nowhere”, who was in charge of all the planes in that group from U.S.S. Hornet was well trained.  He had good intentions.  He thought himself ready for battle.  But, when the battle came, his errors cost valuable munitions and supplies and lives.   The height of battle exposed his weakness in navigation and training.   The testing of his leadership in battle proved he was not fit for command on that day.

Tests in school display whether a child is ready to advance in learning.  Tests in the workplace can weed out those who are more capable at a certain job requirement.   Trials can prove who speaks the truth or who has the stamina to endure.   Tests and trials of various kinds occur through life.  Sometimes, they are planned, as in a classroom or with training.   Sometimes, they come about through circumstance or situation, as with illness or battle or mishap or disaster.   People may think they are ready to handle the tests and trials life throws their way.  Only in the heat of the moment and after, depending on the choices made and the result of their efforts, can you ever know if a person was truly capable of excellence or courage or merit during a difficult moment.

You might think your faith is strong when it is actually weak.  You might think you love God, but an obstacle could prove you wrong.  When your faith is put to the test in some challenge in life, only then will we see if your belief in God is based on sure footing.  Only when you face a trial of your character can we be given a real glimpse of what holds you together.

Charles Spurgeon put it this way:  “If you were to lie in bed week after week and perhaps get the idea that you were strong, you would certainly be mistaken. Only when you do work that requires muscular strength will you discover how strong or how weak you are. God would not have us form a wrong estimate of ourselves. He does not want us to say that we are rich and increased in goods and have need of nothing when just the opposite is true. Therefore, He sends trials to test the genuineness of our faith (1 Pet. 1:7), that we may understand how strong or how weak we are.” (Beside Still Waters, p. 338)

Tests and trials in life are part of living.  They occur whether you are trained or not, ready or not, strong or weak.   They can happen at any time.  The tests or trials may attack your health, your knowledge, your faith, your hope, your family, your body, or your soul.  The test or trial may come from a place in your life where it is expected (sometimes teachers tell you of an upcoming test!).  Satan likes to throw trials your way without your expecting or from a direction you had not anticipated.  God wants you to pass your tests and trials.  Satan wants you to falter and fail and sin.   God will test you to show Him and you how strong and ready and capable you really are for a holy life.  Satan will throw temptations your way to sidetrack you, cause you to falter, entice you to sin, cause you to doubt, or shipwreck your faith.

You can have all the training in the world for a spiritual battle, but you will never know if you have a true faith until you are tested.   Only the challenge of a spiritual test or trial will ever teach you if you are ready for a holy life.   When you find yourself in a test or trial of any sort, keep your focus on God.  Look for the spiritual component of the challenge.   Let your character reflect a resolute and steadfast commitment to God in Christ.

It is crucial to participate in spiritual training before the tests and trials expose your spiritual weaknesses for all to see.  A strong prayer and worship life will fortify your soul.  The knowledge of the Bible will help you understand what you need.  A godly wisdom will take you far.  The Holy Spirit will attempt to direct your path. But all the training in the world cannot help you if in the day of testing and trial you display a faltering faith or doubtful belief in the power of God.

In the scripture for today chosen from 1 Peter, all this clarity about tests and trials in life are exposed.  Peter teaches that “trials will show if your faith is genuine” (1 Peter 1:7).  He should know.  When Jesus was arrested and put on trial, Peter failed his first big test of faith.  He denied Jesus three times.   This test of Peter’s faith was very revealing.  It displayed to Jesus and to Peter that Peter’s faith in Jesus was weak and unworthy.  Rather than give up, Peter endeavored to be a better follower of Jesus.  He helped keep the disciples together after Jesus’ crucifixion.  He kept praying night and day.  He then was filled with the Holy Spirit while his faith grew by leaps and bounds.  Throughout the book of Acts, we read about Peter’s strong faith and determination to be true to Jesus.   Tests and trials proved that Peter was initially unready for Christian leadership.   Later tests and trials proved when Peter was ready to be a beloved patriarch of the Christian Church.
​
Are you facing a few big or small tests or trials in your life?  How have they affected your spiritual life?  Have these challenges proved your love of Jesus or exposed your weak spiritual or moral character?   Don’t be afraid of tests and trials.  Rather, use them to show you are an able follower of Jesus Christ and willing to be steadfast in your commitment to God, no matter what.
​
click here to See may Daily Meditations