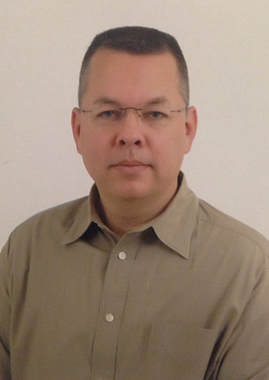 Sadly, throughout the world and history, faithful people have been used as political bargaining chips in world politics.   Often, trumped up charges will be filed against them in areas where few will come to their defense.  In as many as fifty nations today, Christians are being held in prisons or subject to torture.   Pastor Andrew Brunson is one of them.

​Turkish President Recep Tayyip Erdogan has for the first time confirmed publicly that a US pastor jailed in Turkey for the past 12 months is being held by his government as a political hostage.  In a speech at his presidential palace on September 28, 2017, Erdoğan openly called on the United States to exchange Pastor Andrew Brunson for Muslim cleric Fethullah Gülen, a Turkish citizen living in exile in the US since 1999, who is accused of masterminding last year’s failed coup.
​
Turkey has launched a massive internal crackdown over the past 15 months to identify and punish the FETO (Fethullah Terror Organisation) network accused of infiltrating Turkey’s armed forces and government. More than 50,000 “suspected” judges, prosecutors, soldiers, academics, journalists, human rights activists and police officers have been jailed, held for months in pre-trial detention.

Since 7 October 2016, Andrew Brunson has been one of these prisoners. He remains jailed without any written indictment explaining his alleged charges or providing any evidence against him. Judicial proceedings remain stalled, and his lawyer continues to be refused access to the sealed file of accusations against him.

Brunson had lived in Turkey for 23 years, involved in legally recognized church-related ministries. Two months after his surprise detention in the port city of Izmir, where he led the small Izmir Resurrection Church, he was formally arrested on accusations of involvement in unspecified “terrorism” activities. The presiding judge at his 9 December 2016 hearing referred verbally to allegations linking Brunson to the Gülen movement.  Pastor Brunson has been labeled a terrorist and threatened on multiple occasions.
The U.S. State Department has told the press:  “We continue to call for Pastor Brunson’s release… He was wrongfully imprisoned in Turkey.”

US diplomatic officials last visited Pastor Brunson on September 18, 2017 in the maximum-security prison where he is being held in Izmir.