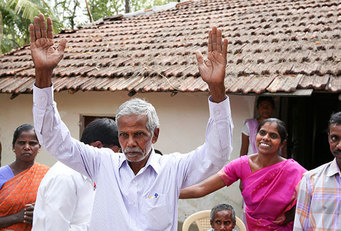 ​Jatya, a pastor in southern India, is happy to show visitors one of his prized possessions. It’s a manila envelope stuffed with old newspaper clippings. The fading pages recount Jatya’s walk of faith through eight separate instances of persecution.

The first clip dates to 1992, when police ordered Jatya to stop sharing Christ with villagers. After he refused to sign a police document, they broke all his fingers. Three years later, he was beaten and thrown in jail for a week. Another time, a Hindu neighbor beat Jatya with a bicycle chain.

After each instance of persecution, Jatya’s response was the same: he grabbed his Bible and went back to work telling others in his village about Christ. After all, he reasoned, everyone needs to hear the Good News!
​Jatya’s most recent brush with persecution came after he shared the gospel with a young man in his village. An angry mob of radical Hindus surrounded Jatya and beat him until he lost consciousness. Voice of the Martyrs paid for his medical treatment after the incident.

For Jatya, the beating wasn’t the important thing about the incident. The most important part of the story, he says, is that the young man became a believer in Jesus! Jatya said he hopes that someday he’ll meet each member of the mob that beat him so he can share Christ with them.

When asked if he was worried about the next time he faces persecution, Jatya quoted 2 Timothy 1:7 — “God has not given us a spirit of fear. …”

“Until my last breath,” Jatya says, “I want to serve and live my life for Jesus.”

​(Source:  Voice of the Martyrs)