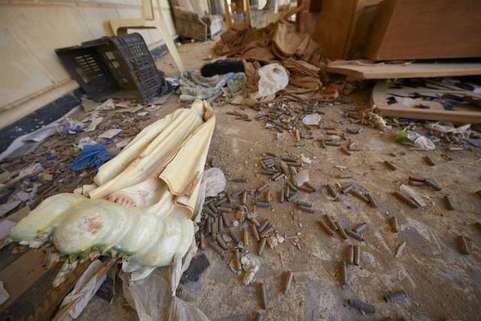 October, 2017:   (At left is picture from the Church of the Immaculate Conception in Bakhdida, Iraq)

New York City, N.Y., Oct 17, 2017 / 03:02 pm (CNA/EWTN News).- Anti-Christian persecution is “worse than at any time in history” and in many cases genocide and other crimes against humanity “now mean that the Church in core countries and regions faces the possibility of imminent wipe-out,” says a new report from Aid to the Church in Need.

The report, titled “Persecuted and Forgotten?”, covers the years 2015-2017. Its contents are bleak, describing Christianity as “the world’s most oppressed faith community.” Anti-Christian persecution in the worst regions has reached “a new peak” and its impact is “only now beginning to be felt in all its horror.”
“In 12 of the 13 countries reviewed, the situation for Christians was worse in overall terms in the period 2015–17 than within the preceding two years,” said the report’s executive summary, released Oct. 12.

John Pontifex, the report's editor, commented that “In terms of the numbers of people involved, the gravity of the crimes committed and their impact, it is clear that the persecution of Christians is today worse than at any time in history. Not only are Christians more persecuted than any other faith group, but ever-increasing numbers are experiencing the very worst forms of persecution.”

The report’s ratings draw from analyses like the Pew Forum’s Social Hostilities Index and Open Door’s World Watch List, in addition to other factors and sources, including fact-finding trips.

In some countries the state is the principal persecutor, while in other countries social groups are culpable, while in still others a combination of both are responsible.

Aid to the Church in Need, an international Catholic pastoral charity, provides emergency and pastoral relief in 140 countries. Its U.S. affiliate published the report.  The report’s foreword was written by Archbishop Issam John Darwish of the Melkite Archdiocese of Zahlé and Furzo, a Lebanese archdiocese near the Syrian border. He recounted the stories of Christian refugees fleeing the six-year-old Syrian civil war.

“Many refugees have told terrible stories of persecution: like the man whose brother, a priest, was kidnapped – and despite the family paying the ransom they killed the priest. They sent his family a box containing his severed wrist, tattooed with a cross, to show he was dead,” the archbishop said.

“Governments in the West and the U.N. failed to offer Christians in countries such as Iraq and Syria the emergency help they needed as genocide got underway,” the report said. “If Christian organizations and other institutions had not filled the gap, the Christian presence could already have disappeared in Iraq and other parts of the Middle East.”

The exodus of Christians from Iraq has been “very severe.” Christians in the country now may number as few as 150,000, a decline from 275,000 in mid-2015. By spring 2017 there were some signs of hope, with the defeat of the Islamic State group and the return of some Christians to their homes on the Nineveh Plains.
However, the departure of Christians from Syria has also threatened the survival of their communities in the country, including historic Christian centers like Aleppo. Syrian Christians there suffer threats of forced conversion and extortion. One Chaldean bishop in the country estimates the Christian population to be at 500,000, down from 1.2 million before the war.

Many Christians in the region fear going to official refugee camps, due to concerns about rape and other violence.

The Islamic State group and other militants have committed genocide in Syria and Iraq. While Islamic State and other groups have been defeated in their major strongholds, many Christian groups are threatened with extinction and would not survive another attack.

In northern Nigeria, the radical Islamist group Boko Haram has engaged in genocide against Christians.
There are reports from North Korea of forced starvation of Christians and forced abortion. Some Christians have been hung on crosses over fire, and others have been crushed by steamrollers. Protestants and Catholics are ranked among those least sympathetic to the state, which limits their access to food, education, and health care. Christianity is linked with American influence, and Christians are executed as spies.

In Sudan, the government’s pursuit of an extremist Islamist agenda led to orders to tear down Christian churches. Christians are arrested for alleged proselytism, and women face fines for wearing “obscene” or immodest dress. The government stripped citizenship rights of people with origins outside Sudan, leading many to leave for their ancestral homelands in South Sudan. Many had lived in their homes for three decades or more.
In January 2017 the U.S. put a six-month waiver on human rights sanctions against Sudan, on condition that the country improve its human rights and religious freedom record.

In Pakistan, banned fundamentalist cells pose a great threat to Christians, but some charge that the government’s failure to crack down on these groups worsens the problem of violence. On Easter Sunday 2016 as many as 24 Christians were killed in targeted violence in Lahore. A faction of the Pakistan Taliban claimed responsibility for the attack.

In India, persecution has increased since 2014, with the rise of Prime Minister Narendra Modi’s right-wing Hindu nationalist Bharatiya Janata Party. Like-minded groups frequently accuse Christians of forced conversion, a charge local Christian leaders strongly deny. An India-based Catholic group reported 365 serious anti-Christian atrocities in 2016, with 10 people killed and more than 500 clergy or church leaders attacked for their faith.
Some Christians have faced pressure to convert under threat of force, while others have been forced to take part in Hindu rituals and deny their faith.

In China, church communities face increased hostility. Authorities in some provinces have removed crosses from some churches and destroyed church buildings. In some regions, Christmas trees and greeting cards have been banned.

President Xi Jinping has depicted Christianity as a means of “foreign infiltration” into China and has advocated more state control and targeting of unofficial churches. There are fears that China’s 2016 announcement of categorization of citizens based on political, commercial, social and legal “credit,” will create a system that disadvantages Christians in a way similar to North Korea.

Christians in Egypt suffered a major suicide bombing attack in December 2016 and again on Palm Sunday in April 2017. Dozens were killed and more injured in both attacks, for which the Islamic State group claimed responsibility.

Saudi Arabia has come under criticism from western powers and the U.S. Commission on International Religious Freedom. However, President Donald Trump signed a $110 billion arms deal with the country, a deal which had been held up under the Obama administration due to human rights concerns. The Aid to the Church in Need report said sources in the country are supplying arms and finances to Sunni extremist groups including the Islamic State, known in the region as “Daesh.”

“Given that Islamist groups such as Daesh are likely to be heavily reliant on undeclared external sources for weapons and intelligence, there is an urgent need to step up action to stop all entities collaborating with them,” the report continued. “Persecuted Christians are among the many who stand to be beneficiaries of progress in this area.”  Archbishop Darwish said it is imperative to help persecuted Christians.  “When the Christian families who have turned to us need the very basics for daily life – food, shelter and medical care – how can we refuse to help?” he asked, lamenting a lack of aid from the U.N. and other humanitarian organizations.
He praised Aid to the Church in Need’s efforts to report anti-Christian persecution and aid those persecuted.

(from a Catholic News Agency article)