Why many Christians in China have turned to underground churches
By John Sudworth:  BBC News, Beijing 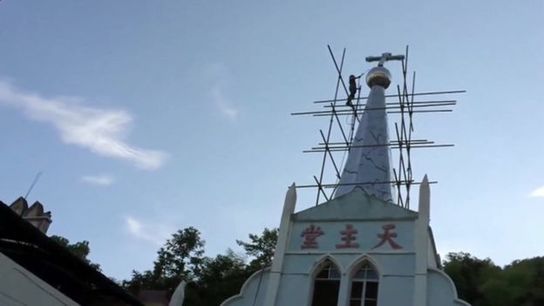 
If Jesus was alive today, would he be a member of the Chinese Communist Party?

Well, perhaps he would, according to one Beijing based priest, who serves in an official, state-sanctioned church. But before we hear from him, let's go back a bit.

The Chinese Communist Party once tried to destroy religion. It failed.  And today, according to some estimates, there are more Christians in China than Communist Party members. Up to 100 million will be celebrating across China this Easter weekend.

But what it failed to destroy, the Party still wants to control. So, an officially atheist government effectively runs its own churches and controls the appointment of its own priests.  Like Pastor Wu Weiqing from Beijing's Haidian Church.  "We have to remember first of all we are a citizen of this country," he says. "And we are a citizen of the Kingdom of God. That comes second."

So then I ask him this: "If Jesus were alive today, do you think he would be comfortable with the Communist Party government in China?"
His reply comes without hesitation: "Absolutely. I think so."

The comment is a perfect illustration of the Communist Party's latest grand plan for religious belief.
Over the past two years, the authorities say they have been trying to develop their own, unique version of Christianity, "a Chinese Christian theology" according to one top official.  Such a theology needs to be compatible with China's political development, which it seems clear, really means subservient to it.


If this is their view of faith, then it is easy to see why even Jesus finds himself being welcomed into the Communist fold.  Not everyone is ready to sign up, of course.

Inside a small, cramped apartment, a group of 10 people studies the Bible and sings hymns.
This is one of the hundreds of unofficial "home" churches in the city of Beijing. Attendees run the constant risk of harassment, and sometimes detention, by the authorities.


Xu Yonghai, leading the prayers today, has served a number of jail terms.  "Official churches are in fact just political institutes," he says. "It is impossible for us to leave Jesus and follow the Party."  In many ways, even the "home" churches have much more freedom than would have been imaginable 40 years ago.

And as with many things in China, cycles of repression and relative relaxation, come and go.
But with the Party's recent emphasis on making religion "compatible with the country's path of socialism" some fear that the room for freedom of worship is about to become even smaller.  So too will the possibility of religion acting as a critical, independent voice of conscience in modern day China.

"I choose to lead a Christian life within the law," Pastor Wu from the official church in Beijing says.
"I certainly will not do what the government does not allow me to do, let's say, preach the gospel in the subway to cause a lot of people to come to me and as a result the street or the road gets blocked."
For a government whose overriding concern is the prevention of mass gathering and unrest, it is the perfect, text-book answer.
​
Chairman Mao may have failed to destroy the church, but the modern Communist Party has gone one better, it has succeeded in co-opting it.