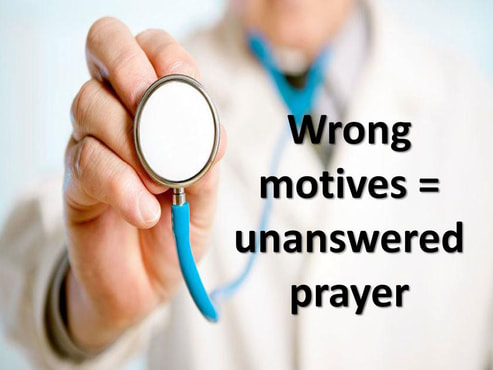 “And even when you ask, you don’t get it because your motives are all wrong—you want only what will give you pleasure.” (James 4:3, NLT)

A tale is told about a small town that had historically been “dry,” but then a local businessman decided to build a tavern. A group of Christians from a local church were concerned and planned an all-night prayer meeting to ask God to intervene. It just so happened that shortly thereafter lightning struck the bar and it burned to the ground. The owner of the bar sued the church, claiming that the prayers of the congregation were responsible, but the church hired a lawyer to argue in court that they were not responsible. The presiding judge, after his initial review of the case, stated that “no matter how this case comes out, one thing is clear. The tavern owner believes in prayer and the Christians do not.” (10,000 Sermon Illustrations).

Prayers are interesting and complex subjects.  They may be deep and engaging.  They may be shallow and meaningless.  Often, your motives will display whether your prayer time is productive or not, deep or shallow, engaging or meaningless.  People may USE prayer for right or wrong reasons.   I’ve heard people wrongly pray to win the lottery, find a parking spot, change another person’s heart (when the prayer needed a heart change!), and more.  I’ve heard hurtful prayers that were meant to harm another person’s feelings or to manipulate a person’s actions.   These prayers are often worldly in origin.  I’ve also witnessed prayers that were deeply faithful.   They filled the hearers with awe-inspiring motivation at the power of God.  They challenged the religious to step out in faith.

Prayers may fall into the worldly or faithful categories based on the motivations involved.  If a person’s motives are selfish or sinfully based, the prayer usually will fall into a worldly category.   The scripture for today warns about prayers that become worldly.   James 4:3 teaches that when you ask for something in prayer, you will not get it when “your motives are all wrong”.   If you “only want what will give you pleasure”, God will see your prayer as worldly motivated and unworthy of God’s action.  On the other hand, a prayer that is faithfully motivated is powerful and changes lives (James 5:15,16).

When you pray, you need to constantly self-evaluate the motives that are present in your prayers.  If you pray for God’s intercession, that’s fine, unless you want God to intercede to get what you want and not what God wills.   If you pray for God’s hand to be upon someone who is sick, that’s great, but not if you want that person to be well in order to look good or get some advantage from that person.

When Kristen came to see me, she was upset.  She claimed that one of her most important prayers had not been answered by God.   She was growing frustrated and stymied by the lack of an answer by God to her prayer.   The first question I asked her was, “What did you pray for?”   When Kristen heard this, her eyes bugged out and she said, “That’s between me and God!  You can’t ask that!”   We then talked for a good while about right and wrong motives in prayer and the scripture for today from James 4:3.
​
A half hour later, Kristen finally divulged the content of her unheard prayer.  She had prayed for her best friend to dump her mean boyfriend. After more conversation, I found out that the boyfriend involved tended to be arrogant and rude around Kristen.  He was not a Christian.  Though he was kind-hearted, he could get in a snit and tease mercilessly.  Kristen feared her best friend was becoming more quiet and reserved because of his boisterous words and actions.

After further discussion, I helped Kristen to see that instead of praying for the boyfriend to “get lost”, why didn’t she pray for the boyfriend to come to Christ?   She replied that he was too rude to be a good Christian, let along a good boyfriend.   I told her that God may not be answering her prayer because she was giving God her own view of the situation.  Instead of seeing all the possibilities for God to help and asking for God’s hand in the entire matter, she was telling God what to do.  With a negative outlook on the possibilities, Kristen promised to pray for the boyfriend to accept Christ and have a change of heart.

It took a whole two years of Kristen’s prayers before anything happened.  During that time, Kristen kept her promise to pray for the boyfriend.  What she learned during those two years, she shared with me.  She discovered that her best friend never really shared her faith with her boyfriend.  She also found out  that the boyfriend had come from a broken home and used insults and teasing to cover up his insecurities.  Kristen asked her best friend and her boyfriend to come to church with her for a special event.  She also spent time talking about her faith with both of them.  Kristen’s influence made a difference.  Before the boyfriend proposed to her best friend, he decided to be baptized at the church they would attend together.   Going through the classes before baptism began a relationship between the boyfriend and God that took off in a beautiful way.    The wedding was a joy to attend!  Many prayers were answered!

You may not even be aware when your prayers slip into the worldly category.  You may not be fully cognizant that your prayers have become rather selfish in nature.   It can be so easy to allow your prayers to become rote, boring, self-centered, and worldly.  You might slip into a list of needs for God without realizing the consequences if the prayers were answered or if they are indeed godly.
​
The scripture for today should be a constant reminder that your prayers with God are deeply important.  They reveal your soul to God.  They expose your desires and motives and thoughts and hopes and wishes.   It is crucially important that you take the time to evaluate why you are praying and what are the real needs involved.   You don’t want to end up with prayers that go unanswered simply because you aren’t invested with the right motivations from the start!
​​