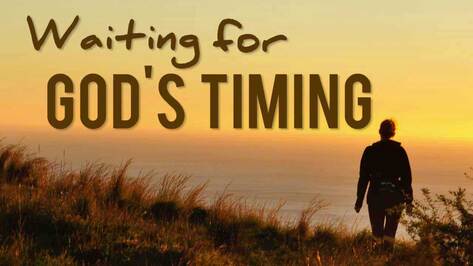 “Be patient, then, brothers, until the Lord’s coming. See how the farmer waits for the land to yield its valuable crop and how patient he is for the autumn and spring rains. You too, be patient and stand firm, because the Lord’s coming is near.” (James 5:7–8, NIV84)

Do you find it difficult to wait upon the Lord?  When you see a problem, your normal thinking might be to fix that problem right now.  Upon encountering an obstacle, you might desire to get rid of it without a second thought.  Be careful, my friend, sometimes an obstacle or a challenge or a difficulty or an issue might be put in your life for a godly reason.  God might be using it to mold some part of your spiritual life, to engender patience in your mind, or to expose something needing work.  Rushing too quickly to erase an obstacle in your life might lead to hasty or risky or spiritually damaging conclusions.  Let me show you what I mean.

The mother of the first boy took him home and without a second thought punished him severely.  She was so angry at having to take time off work that she let her emotions get the best of her.  Her reaction was overzealous.   The second mother took her son home and had a long talk with him.  She then gave him several jobs to do and throughout the time, they talked over what had happened and what the boy should have done.

The second mother found out that the boys interrupted the class because a girl in their class was hurt on the playground during recess and was afraid to tell anyone.  When the class came in from recess, they were told to be quiet and take their seats for a surprise test.  The boys protested.  They wanted the teacher to help the young girl.  The girl lied, saying there was nothing wrong.  The boys protested further, knowing that the girl was bleeding down her leg underneath her pants after a nasty fall.  Because the girl said there was no problem, the teacher got upset with the boys for interrupting class time and delaying the test.   Upon hearing this, the second mother ended all her son’s punishments.  She contacted the other mother and relayed the events.  While the first mother was busy apologizing for overreacting, the second mother and son were bonding over the whole situation.

The first mother was so quick to punish her son for a perceived wrong, that the whole situation blew up in her face.  It resulted in hurt feelings all around.  The second mother took the time to gather information, form a plan of action, and handled things very well.  Yes, the boys still faced consequences at school.  However, the second boy realized that maybe they should have handled things differently.  Also, there was the bonus that the second mother and boy grew closer despite the problem at school.

When you jump to hasty conclusions or act too quickly before understanding the implications, you are bound to make mistakes.  The same thing occurs in your spiritual life.  If a challenge or personal problem occurs, you may want to fix it overzealously.  You may want to get rid of it before God even has a chance to help.  You might go all nuclear on a friend without understanding the ramifications or even the facts of the matter!   James 5:8 is a clear reminder that sometimes just standing firmly in faith and being patient until the Lord reveals the best way to act will uncover the best solutions to a problem.

When feeling ill, are you too quick to find a medical answer instead of letting God work?
Do you throw money at a problem to make it go away instead of finding the most godly solutions for all involved?
Are you patient enough to wait upon the Lord, giving time for God to work out your anger or ease your hurting?
Do you take anxiety medications without seeking peace and ease from God through prayer and other means?
Are you quick to take a pill to fix your symptoms instead of working with God on all your problems?

God will help you, but only if you take the time to look for real, long-lasting, godly solutions.  Don’t be so quick to make a problem go away.   The Apostle Paul mentioned in 2 Corinthians 7-10 how God used a person who was a “thorn in Paul's flesh” to keep him on the right track.  By not ridding himself of this difficult person (who was even sent by Satan!), Paul was able to learn some valuable spiritual lessons from God.  At times, that “bad” person in your life might be the very one God will use to bring insight!

Our scripture for today from James 5 reinforces this understanding.  James pointed out that patience is not only required “for the land to yield its valuable crop”, it is necessary for the Christian who needs direction.  As the farmer waits for the “autumn and spring rains” to nurture the ground, so must you also wait upon the Lord before you act.  Not everything in life requires an immediate response or hasty reaction.

"A while back I read a story of a visiting pastor who attended a men's breakfast in the middle of a rural farming area of the country.  The group had asked an older farmer, decked out in bib overalls, to say grace for the morning breakfast.
"Lord, I hate buttermilk", the farmer began. The visiting pastor opened one eye to glance at the farmer and wonder where this was going. The farmer loudly proclaimed, "Lord, I hate lard." Now the pastor was growing concerned. Without missing a beat, the farmer continued, "And Lord, you know I  don't much care for raw white flour". The pastor once again opened an eye to glance around the room and saw that he wasn't the only one to feel uncomfortable.
Then the farmer added, "But Lord, when you mix them all together and bake them, I do love warm fresh biscuits. So Lord, when things come up that we don't like, when life gets hard, when we don't understand what you're saying to us, help us to just relax and wait until you are done mixing. It will probably be even better than biscuits.  Amen."

Every time you see a Christmas cookie or holiday treat, remember the meditation for today.  Like baking, some things from the Lord take time and just the right combination of ingredients to come out perfect.  If you rush things, they may leave a bad taste in your mouth!