“I want you to know, brothers, that what has happened to me has really served to advance the gospel, so that it has become known throughout the whole imperial guard and to all the rest that my imprisonment is for Christ. And most of the brothers, having become confident in the Lord by my imprisonment, are much more bold to speak the word without fear.” (Philippians 1:12–14, ESV) 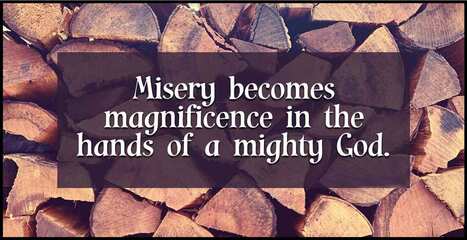 Most Christians tend to “quick-read” the scripture.  They open a Bible and hurriedly read or scan over a reading.  Often, they don’t meditate on that scripture, parse it, plumb its depths, or search for personal meaning.  They see the scriptures as “stories from long ago” instead of inspiration for the day.   If you look at the scripture above from Philippians 1:12-14 in a cursory manner, you will miss a lot of its power.  You may overlook some important key elements that are not obvious upon initial reading.

The scripture for today was written by the Apostle Paul when he was imprisoned for preaching the gospel.   Let’s stop and think about this for a moment.  Paul was imprisoned for telling people about Jesus, sharing the good news of salvation.   However, this preaching and teaching went against Roman religion and Jewish authority of the day.  The political and religious leadership sought to stamp out the gospel, quelling the growing movement around Jesus.    Actions against Christians like Paul resulted in imprisonments, stonings, beheadings, and all manner of beatings and suffering and death for faithful Christians who just wanted to share the good news of Jesus’ life, death, and resurrection.

You might look at this as being totally unfair, unreasonable, and manipulative.  It was!  It was all unfair.  While murderers and thieves of the day went free (remember Barabbas?), righteous and good Christians were being hounded, tortured, and murdered.  So, what is unspoken by Paul in this scripture should be obvious to you now.  Not only was Paul imprisoned for spreading the gospel, ordinary Christians in those perilous times suffered constantly just to share their faith!

Within this backdrop of imprisonment and suffering, did Paul become depressed and upset at the unfairness?  Did he lash out at those who imprisoned him?  Did he notify social media to bring a firestorm over the internet? ;)  Nope.  Paul got excited!  Yes, excited!   Even though he was treated unfairly and imprisoned for being a righteous and holy man, Paul focused not on his circumstances but on God’s overwhelming potential.   Despite his being imprisoned, Paul was able to “advance the gospel” (Philippians 1:12).   He found time to share the gospel with guards and others in the prison!  He didn’t become despondent and clam up!   He didn’t fuss and kick and scream all day long!   He shared the gospel even more!   Not only that, but as other Christians noticed Paul’s attitude; they “became confident in the Lord”, “speaking [of Jesus] without fear” (Philippians 1:14).  Despite the gloomy environment of prison, Paul was red-hot fired up at the opportunities he had been given to share the gospel!

Do you let your circumstances control your mood and faith, or do you let God open up your eyes to all the blessings around you?   Paul didn’t let his imprisonment bring despair or depression, even in the worst of circumstances!  With a heart for Jesus, he used that time in prison to bring the gospel to the people around him.  He saw God’s blessing in spite of the imprisonment.  Paul was filled with joy for all that happened during his time of incarceration.

On one mission deep into enemy-held territory, David suffered a terrible turn of events.  When ambushed, David unpinned a phosphorus grenade, intending to throw it upon the enemy.  In that instant, he was shot in the very arm that held the grenade.  The grenade exploded close by and threw fiery phosphorus all over David’s head.  In a surreal moment, David looked into the water next to him and saw part of his face melt off.   David was disfigured terribly when sent back by helicopter for emergency surgery.

David not only had emergency surgery that day but multiple surgeries in the coming weeks.  He was horribly burned.  His face was marred from the damage.  Scars from surgical implants and debreeding pockmarked his forehead, cheek, and neck.  The pain was excruciating.  The emotional and psychological pain was crippling.

Several years later, David was interviewed on by a reporter about his service.  On national television, David made this incredible statement:  “I am twice the person I was before I went to Vietnam.  For one thing, God has used my suffering to help other people’s pain and to have an incredible burden to reach people for Him.  The Lord has let me have a worldwide, positive effect on people’s lives because of what I went through.”  For years, David was well known for reaching out to those who had suffered tragedies.  He helped them work through their problems, suffering, and sorrow.  He was given many chances to share his love of Jesus.

Don’t let your circumstances control your mood or your faith.  Don’t let problems or difficulties or obstacles sour your view of God’s blessings that surround you even now.   Paul would not let prison deter his preaching of the gospel.  David wouldn’t allow his misfortune in war cloud his appreciation for God’s blessings.  God always puts hope and blessings around you.   Are you open enough to see them?
​
Life isn’t fair.  People can be cruel.  The world can be unbearable at times.  Despite all the negatives, God is always good.  God’s love is always ready to light up your world.  God’s forgiveness can heal the deepest of your burdens.  Don’t let the unfairness of the world get you down.  Look up to Heaven for your saving grace!
click here to See other march Daily Meditations