Is worldiness creeping into your life? 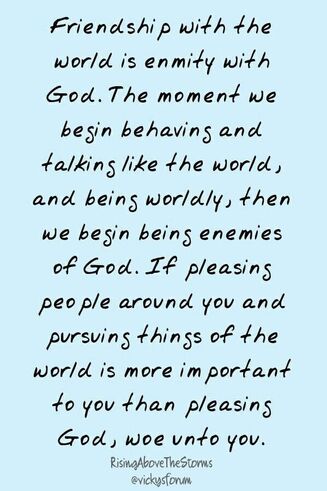 “For those whom he foreknew he also predestined to be conformed to the image of his Son, in order that he might be the firstborn among many brothers.” (Romans 8:29, ESV)


Whether you pour water into a breaker or a bowl or glass, the water will conform to the shape of the vessel in which it is poured.   If you dump sand into a sandbox, it will conform to the shape of the box.  Many things in life adapt to their surroundings by conforming to outside pressures and restraints.  It is just physics.  However, God made people NOT to conform to worldly pressures and restraints.  Humans were created to conform to the image of God.   The book of Genesis even tells us that we were created by God “in His image” (Genesis 1:27).  That is why the Second Commandment declares we should never worship a “graven image” (Exodus 20:4).  You are meant to conform your life in the image of God, not worldly creatures, not other people, not to modern standards, not false gods.

Many people today have forsaken God’s commands.  They do not desire to be faithful or loving or even holy.   Rather than conforming to the image of God, all too many have chosen to conform to the standards and preferences of the world.  They have adopted worldly ideals, worship earthly powers, and follow earthly norms, even when they are evil.  During the Twentieth Century, many Nazis chose to follow Hitler, conforming their ideals and values around the German National Socialist Party.  Even Christians in Germany fell under the spell of Hitler.  Followers of Mao, Lenin, Confucius, and many more have conformed their beliefs and view of life around the leaders of these movements and rejected the sovereignty of God.  In the world today, there are people who have conformed to political ideals, formed their opinions by conforming to social media, adapted their values to be politically correct, and chosen to respect those with power instead of God’s authority.

It is all too easy to conform to worldly standards or beliefs.  Peer pressure, societal norms, and popularity often trap those who do not have the backbone to stand up for God.   They choose to conform to the world rather than conform to the image of God.

“Em Griffin in his book The Mindchangers describes an experiment done by Solomon Asch with groups of 12 people. They were brought into a room where four lines of unequal length were displayed.  They had to decide which two were the same length and publicly vote for their choice. Person after person after person (11 in all) voted for the wrong line—because they had all been told to ahead of time. The one individual who was in the dark couldn’t imagine how in the world all these seemingly normal people could all choose the wrong line. When it was his turn to vote, he had to decide, “Do I go with what I know my senses are telling me, or do I go with the crowd?” 1/3 of those tested caved in to group pressure and changed their vote to agree with their peers.”  (Em Griffin, The Mindchangers, p. 193ff).

In a recent “off the record” conversation with a scientist, I had a chance to see how scientists and science projects were changing.  The scientist I spoke with confirmed what I feared.  For fear of losing their positions at research facilities and universities and in governments, many scientists are twisting the evidence in order to get grants and positions in highly respected places.  They are manipulating data to fit in with popular notions, to be accepted by government agencies for grants, and to get promoted.  If the data doesn’t fit the way the group or agency or university leaders desire, the models are shifted to accommodate popular beliefs and norms.  The scientist said to me, “No highly respected scientist uses a pure scientific method any longer.  Their methods are adapted to fit an outcome.”

Our scripture for today from Romans 8 explains that the true Christian is one who is “conformed to the image of His Son” (Romans 8:29), conformed to Jesus.  If you consistently choose NOT to conform to this world but instead choose TO conform to the will of God in Jesus Christ, God notices that difference.  God applauds that stance.  The world may laugh at you, spit on you, drag you through the mud for not conforming to its ways.   To be truly faithful to God, you must be different from the world.  You were created to be “conformed to the image of Jesus”.

If any part of your life is being conformed to the ideals and ways of this world, you will find that your soul will be ill-at-ease.  You were meant to give this world an image of God.  You were meant to display faithfulness to Jesus Christ.   A re-evaluation is in order.  You must choose God over the world, conformity to Jesus instead of conformity to the social norm, a courageous faith not cowardly submission.

Only true people of faith will ever conform to the image of Jesus.   The rest will be content to just fall in line with what is correct or acceptable in the eyes of the world.  ​