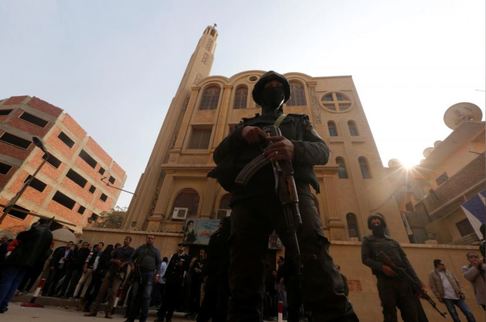 December 29, 2017  CAIRO (Reuters) - Gunmen killed at least nine people including three police in an attack on a Coptic Christian church south of Cairo on Friday, medical and security sources said.
​
The two attackers opened fire at the entrance to the church of Mar Mina in Helwan district, which was being guarded by police in the run-up to Orthodox Christmas celebrations next week, security sources said.

One attacker was shot dead by security forces, the sources and the state-run news agency MENA reported. State television said the second had been captured.

The Health Ministry said that nine people had been killed on Friday in addition to the gunman, and five wounded, including two women in serious condition.  Local media said the dead attacker had been wearing an explosive belt, and that two other bombs had been defused near the church.  Sirens were heard in central Cairo immediately after the incident.

Police have stepped up security measures around churches ahead of the Coptic Christmas celebrations on Jan. 7, deploying officers outside Christian places of worship and setting up metal detectors at some of the bigger churches.
​
Reporting by Ahmed Mohamed Hassan and Amr Abdallah; Writing by John Davison; Editing by Kevin Liffey