Life in the pits? 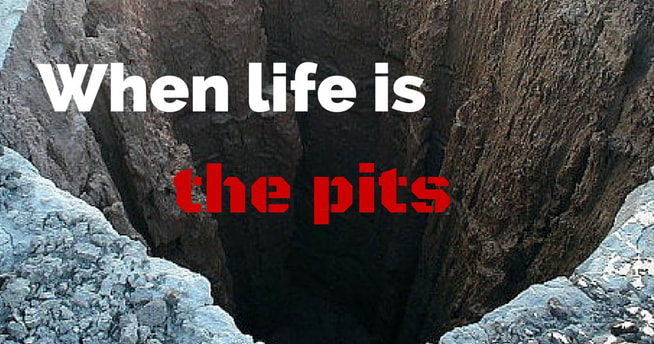 “Bless the LORD, O my soul, and forget not all his benefits, who forgives all your iniquity, who heals all your diseases, who redeems your life from the pit, who crowns you with steadfast love and mercy, who satisfies you with good so that your youth is renewed like the eagle’s.” (Psalm 103:2–5, ESV)

The scripture above chosen especially for you today concerns God’s great deeds on your behalf.  Those who follow God are “blessed”.   Therefore, we “bless the Lord”, not forgetting “all HIS benefits” (Psalm 103:2).  God does many things for you.  God “forgives” your sins.  God “heals” your diseases.  I wonder how many times God has healed your body from some virus or infection or illness?  God “crowns you with steadfast love and mercy” and “satisfies you with good” (Psalm 103:4-5).  God can even “redeem your life from the pit”.   God can reach into your life when you are in a lonely and dark place, a place that feels overwhelmingly depressing, and bring you up out of that situation.  Through many types of interactions, God can make your soul soar to new heights and your world seem so much brighter.

Monica waited for years to have her first child.  As a child, she dreamed about being a mother.  After she found Tom, she began to get more excited about her future.  In so many ways, he was her soul mate.  After the two got married, Monica longed for the day when she would have a baby.  She dreamed about it.  She visited maternity sections of stores and picked out her favorite crib and stroller.

Three years after they were married, Monica missed her period.  That day, a pregnancy test confirmed that she was indeed pregnant.  Monica was so excited.  It seemed like her life was so blessed.  When Monica gave birth to Steven, she was filled with awe at the beauty of his little fingers and the smell of his baby skin.   She didn’t mind cleaning his diaper or the lack of sleep when he was up at night.  She was now a mother!  It was her life-long dream.

Two weeks after coming home from the hospital, Monica began to experience unusual symptoms. She started to cry a lot.  Also, her desires seemed to change.  She didn’t feel like receiving hugs and kisses from Tom.  She felt tired and irritable.  She seemed to enjoy being around little Steven less and less.  Day after day, it felt like the skies were gray and she was overwhelmed.  She had no energy.  She stopped taking showers.   She wore the same clothes even when the baby spit up on them.  Then, one morning she asked her husband to take care of Steven all day.  Lying in bed, she felt like her life was in the pits.  She regretted motherhood.  She felt overwhelmed.  She wondered if she had messed up her life.   More than a dozen times, she cried out to God in prayer.  Every time she opened the Bible on her nightstand to read a few verses, she couldn’t concentrate.  She then began to wonder if she had also failed God in some way by not loving her family enough.   This caused her to feel even worse.  Her world seemed bleak.   She cried on and off the rest of the day.

After hours of Monica’s symptoms, Tom tried to console Monica.  Nothing seemed to help.  Finally, he called the doctor.   Tom set up an appointment for her, making all the arrangements so they could go in together.   A relative was called to take care of Steve.  Tom and Monica left for the doctor’s visit.
​
The doctor found that Monica had post-partum depression.  He prescribed her some anti-depressants and urged the family to help her more.   Tom took another week off work.  Monica’s mother came over and cleaned the house twice a week.  A friend of Tom’s took care of a leaking faucet.  Two of Monica’s friends took her out to a nice dinner each week.  Monica’s pastor stopped over at the house twice to check on her and do some informal counseling.   Everybody pitched in.

It took almost three months for things to look better for Monica, but she came around. She began to pray again.  She began to smile more often.  She became more social.  She started to flirt with Tom.   When Monica later described what it was like to have post-partum depression, she told her pastor that it felt like she was in a deep pit with no way out.  Life was gloomy and lonely.  The pastor read from the scripture above, “Bless the LORD, O my soul, and forget not all his benefits, who forgives all your iniquity, who heals all your diseases, who redeems your life from the pit…”   Monica smiled at how poignant the verse seemed to be.  She was so enamored by that Bible verse that she memorized it.  On her down days, she would say it out loud from memory until things began to look up.   And one more thing…. Monica and God grew very close during this dark period of her life.   Monica could feel HIM trying to break through, to bring light into that pit of hell known as postpartum depression.
​
There are so many ways that God blesses your life.  Isn’t it time you “bless the Lord” with your soul?  Do you remember a time when your life was “in the pits”?  God was with you, trying to bring light to that darkness.  Do you remember a time when you were hurting?   God was also with you, healing your pain.   You may never know how many times God reached out to you, touched you, healed you.  But you can bet your last dollar that God did it.  Why?  That’s who God is.  That’s how God works.
​​​