Is Satan toying with you? 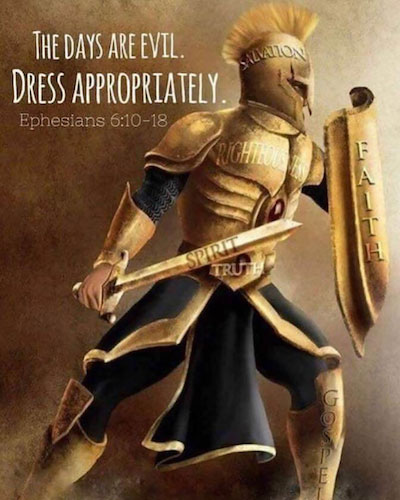 “Put on the whole armor of God, so that you may be able to stand against the wiles of the devil.” (Ephesians 6:11, NRSV)

Like Satan, worldly people who reject God’s ways are also prone to wiles and schemes.  Also in Ephesians, Paul wrote that the “cunning of men” produces “craftiness in deceitful wiles” (Ephesians 4:14).  Taken together, the Bible makes clear that the devil and some people have this in common;  they employ wiliness, craftiness, and deceitfulness.  They will use their smarts to get their way, control a situation, or manipulate people.   Their “wiles” make it so that they care more about an outcome in their favor than the damage their deceitfulness might engender.

Two brothers were getting ready to boil some eggs to color for Easter.  “I’ll give you a dollar if you let me break three of these on your head,” said the older one.
“Promise?” asked the younger.
“Promise!” Gleefully, the older boy broke two eggs over his brother’s head.
Standing stiff for fear the gooey mess would get all over him, the little boy asked, “When is the third egg coming?” “It’s not,” replied the brother. “That would cost me a dollar.”

In this humorous exchange, one brother used his craftiness to tease his other brother.  It was mostly harmless.  What happens when that craftiness is used for harm?

A husband and wife had serious marital problems.  At first, the most pressing issue was that the husband had an addiction to cocaine.  Every now and then, he would go off for a few days and become totally trashed.  In the process, he blew thousands of dollars a month.  This penchant grew into a habit, then into an addiction in the span of about four years.  During that time, the two fought more and more.  Their three young children began to take sides.  The entire family walked on eggshells.

In order to deal with the addiction and its toll on the family, the wife began to confide in her best friend at work.  The wife’s best friend was a man who was previously divorced.  The more they talked and shared, the closer the wife and her best friend became.  Then, they began to have an affair.   This added to the family problems and fights.  When the husband found out about the affair, he spread the news far and wide.  In response, the wife shared with coworkers and neighbors about the husband’s use of cocaine. The gossip caused the whole family to feel uncomfortable in worship, so they stopped attending.  The mess was compounded with divorce.

To this day, thirty years later, the family members fight among each other.  The husband believes the wife was seduced by her best friend (who haven’t talked since).  The wife believes all the family’s problems were initiated by her addictive husband.   The children have had a very rocky time of it.  The family has been in counseling of one type or another for two decades.

This family used to be in church most every Sunday.  Now, they all deal with guilt and anger and resentments and more with each other and with God.   How did all this happen?  A man who had a lot of stress chose to be seduced by a drug.  The wife was seduced by her best friend.  Both had friends who weighed in on the problems.  Some made it worse.  No doubt, the devil wanted to see this church-going family fall apart.  All in all, the wiles of the devil and bad choices brought highly destructive results.
Beware the wiles of the devil.  1 Peter 5:8 warns that you ““Be sober-minded; be watchful. Your adversary the devil prowls around like a roaring lion, seeking someone to devour.” (1 Peter 5:8, ESV).  The devil will watch for your weakness, search day and night for a toe hold in your thoughts.  He seeks a way into your day, desires to bend your emotions to his will, and will twist your thoughts to do his bidding.

Ephesians 6:11 gives a way to counter Satan’s wiles.   You need to “put on the whole armor of God”.  Ephesians 6 lists pieces of that armor that you will need such as truth, righteousness, peace, faith, salvation, and the word of God.   Each of these pieces of armor will add to your ability to fight off the devil’s machinations.  These, along with the sword of the Spirit (Ephesians 6:17), will help you fight God’s battles.   Each of these pieces of armor and the sword of the Spirit deserve a meditation of its own.  I cannot mention all the implications and details here.  However, what I can say is that you need ALL the armor to fight Satan.  Let God help you perfect each bit of armor to perfection.
​
The devil has had centuries to hone his craft.   He is very good at finding your weaknesses and using his evil wiles.   God wants you to overcome.  God has given you armor for the fight.  God’s Spirit can guide you.  God will be there for you on the day of battle.  Just make sure you are ready for the fight.