What is Spiritual Radar? 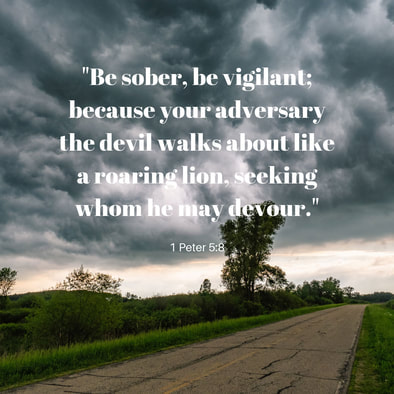 “For we are not fighting against flesh-and-blood enemies, but against evil rulers and authorities of the unseen world, against mighty powers in this dark world, and against evil spirits in the heavenly places. Therefore, put on every piece of God’s armor so you will be able to resist the enemy in the time of evil. Then after the battle you will still be standing firm.” (Ephesians 6:12–13, NLT)


Hypervigilance often keeps soldiers at the front alive.  Hypervigilance is a state of increased alertness. If you're in a state of hypervigilance, you're extremely sensitive to your surroundings. It can make you feel like you're alert to any hidden dangers, whether from other people or the environment. Hypervigilance is the brain's way of protecting the body from danger. It keeps the focus on anything that could be dangerous, like something moving in the darkness or a sound that shouldn’t be there.   Some soldiers are so good at hypervigilance, their senses can pick up the enemy with something as small as a light smell wafting with the breeze or a small twig breaking on a path in the dead of night.

A good soldier enjoys being hypervigilant.  It can save his or her life.  A soldier that is new to the surroundings will not have honed the ability of hypervigilance.  Thus, he or she is incapable of sensing dangers, unaware of the change in their surroundings, unable to pick up on the danger nearby.   Being able to sense when something is wrong, even when everything seems normal, can save lives.

““I don’t like her.” I was probably seven years old when I told my mother my reservations about a woman who was going to be my aunt. My uncle had brought his striking fiancée to meet the family. She smiled, but something about her said “Beware.”
After my uncle married his bride, her true nature came out. She was as cruel and beautiful as Snow White’s stepmother. My mother remembered my words and remarked that children see what adults often miss. I’ve thought about that when, as an adult, I’ve tried to talk myself out of uneasy feelings. I wanted to like the people I met. Trusting feels nice. Believing the best sounds kind. Yet, over the years, my instincts have usually proven right.
God’s Word helps us built a sound alarm system that warns and protect us. His Spirit activates that alarm as we walk with Him. Our radar may not spell out what’s wrong. It just tells us to be careful. We don’t have to understand the why. We just need to heed it.” (Debbie W. Wilson, Crosswalk.com, April 19, 2017)

Our scripture for today reminds us that evil wages battles in this world.   Ephesians 6:12 states that “evil rulers and authorities” contend against God.  There are “mighty powers” at work that are “unseen” yet so very deadly.   In order to be faithful in these spiritual wars going on around you, you need to “put on every piece of God’s armor so you may be able to resist the enemy I the time of evil” (Ephesians 6:13).  Your hypervigilant spiritual radar will help in this endeavor.  The Holy Spirit in you will give up warnings and cues to what is unseen to others.  You will pick up on the presence of evil.  You will sense true faith in a person.  You might pick up some amount of ill-will as you banter with someone at work.  Your spiritual radar might point you to someone who really needs a prayer right now.   Don’t overlook that inner voice, that spiritual radar.  Be hypervigilant as the spiritual battles wage around you.   “Then, after the battle you will still be standing firm (Ephesians 6:13).”
​
When your spiritual radar warns you to be on watch, trust it.  Learn to attune yourself to the voice of God and the whisper of the Holy Spirit.  Discern what is going on around you spiritually.  Be aware of the battles between good and evil that so many of the world completely ignore.   Spiritual hypervigilance can save you and those nearest to you.
​