“Do you really think you can steal, murder, commit adultery, lie, and burn incense to Baal and all those other new gods of yours, and then come here and stand before me in my Temple and chant, “We are safe!”—only to go right back to all those evils again?” (Jeremiah 7:9–10, NLT) 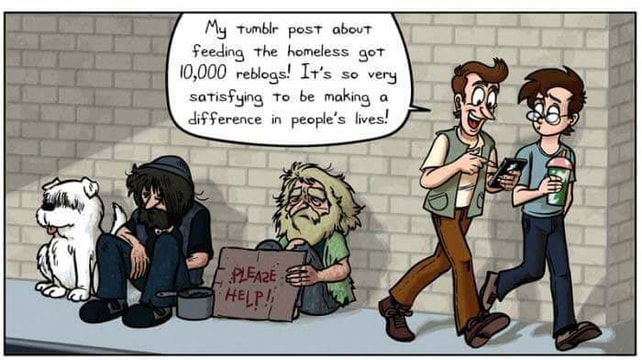 Al Gore went public about the evils of global warming and its dangerous effects on the planet with his movie, “An Inconvenient Truth”.  While doing so, he lived in a 10,000 sq. ft house that was far from ecologically beneficial to the environment.  His electric bill at the time was twelve times the national average at over $1300/month.

A nationally recognized Caucasian celebrity had a photo shoot to promote his acting career.  To make himself appear “inclusive”, he had his picture taken at a homeless shelter working beside several black men and serving food to a homeless family.  The picture made a splash across the nation.  People thought him so relevant, inclusive, and definitely not a racist.  His friends knew better.  One leaked to the press that the celebrity has never helped at any homeless shelter before or since that shoot and doesn’t even support the shelter shown in the pictures in any way.  I bet the celebrity’s publicist had a fit.

When Black Lives Matter showed power in the news cycle earlier this year, several pictures and videos came out of people who took selfies of themselves in front of BLM signs and at protests.  Some of these selfie-takers did not support the movement.  A few couldn’t even name the reason for the protest that they attended.   They just wanted to post their picture supporting it on their online accounts so all their friends could tell them how open and giving and inclusive they are in “real life”.

Virtue signaling is “the action or practice of publicly expressing opinions or sentiments intended to demonstrate one's good character or the moral correctness of one's position on a particular issue.”  Virtue signaling is what each one of these people above were doing in these situations.  They were offering up a public persona that conflicted with their own personal agenda.  Because virtue signaling has only been found in the urban dictionary in the past decade, people think it’s a new phenomenon.  It is not.  It is even displayed openly in the scripture for today.

In the days of the prophet Jeremiah, God exhibited great disdain for the people of Israel and Judah.  In today’s scripture from Jeremiah 7, God is critical of the Jewish people who committed great sins like stealing, murder, and committing adultery.  They even worshipped other gods like Baal behind closed doors.  What was the attitude of those seemingly religious people at the time?  “We are safe!”(Jeremiah 7:10)  In their reality, they were protected by God due to their being Jewish.  However, they did not act faithfully.  Despite their presence and chanting at the temple so that all could hear and see their “virtue signaling”, they did not have a real heart for God.  After their public display of fake faith, they went “right back” to all those evils again” (Jeremiah 7:10).

Beware of people who are quick to show their moral greatness for all the public to see.  All too often, especially in these days of social media, their morality is not real.  They are merely virtue signaling.  Even in the church, you may have those who like to appear morally pure in public.  They are constantly honing their religious image, perfecting their piousness.  That is why God does not look at the appearance of any person.  God looks at the heart (1 Samuel 16:7).  God is not fooled by shallow displays designed for public consumption and self-promotion.   God looks at the motives, the heart, the faith, the soul for confirmation of every public display of goodness and faithfulness.

Jim and Tammy Bakker were extremely well-known evangelists of the 1980’s.  They founded the PTL (Praise the Lord) Network that was seen by millions on TV.  There were many people at the time who claimed that the Bakkers were more influential than most national leaders in the United States and abroad.  But while they were praying and singing and sharing their faith all over networks, the Bakkers were living a lie.  It was revealed that Jim Bakker had given $270,000 to Jessica Hahn to keep her silence about sexual improprieties.  He also siphoned up large portions of money from his viewers who gave their tithes to his ministry.  He drove expensive cars and lived in posh opulence.  His wife spent large sums on drugs until she went into rehab for drug dependency.  This very same couple who praised God openly on Monday morning TV were living in sin privately.  Just as did Judah in the days of Jeremiah, they chanted to God on one day and returned to their evils the next.

God’s wrath tore into Judah less than twenty years after Jeremiah spoke the words written in the scripture for today.  All the virtue signaling of the Judeans could not stop what God knew… their hearts were filled with sinfulness.  Despite their public displays of faith, God knew better.   God would not allow the lies to continue.  The Temple was even destroyed.

If you find yourself more interested in looking good than being godly, you will not like where this will lead.  God does not desire faithful followers who appear to be just and righteous.  God wants faithful followers who LIVE OUT justice and righteousness.   Shallow forms of faithfulness do not impress Almighty God.  In fact, God hates such displays.  The prophet Amos reported on how God despised the holy feast days of the sinful Israelites (Amos 5:21).  Their sin wrecked God’s acceptance of their offerings.  Jeremiah 6 also reiterates this reaction from God.  So does Isaiah 1:13, 14.  The prophets knew well that virtue signaling is a facade made for public consumption.  It is mere smoke and mirrors.

Are you serious about what you believe?  Do you care a little too much about your public image and too little about your real relationship with God?  Do you talk about the faith but not live it?  Are you more show than go?   Fake news is all too common today.  Evidently, so are fake people.  Don’t be one of them!  You won’t like what that “fakeness” does to your soul or your relationship with God.
​
click here to See november Daily Meditations