“… you must hold firmly to faith and a good conscience, which some have rejected and so have suffered shipwreck in regard to the faith. Among these are Hymenaeus and Alexander, whom I handed over to Satan to be taught not to blaspheme.” (1 Timothy 1:19–20, NET) 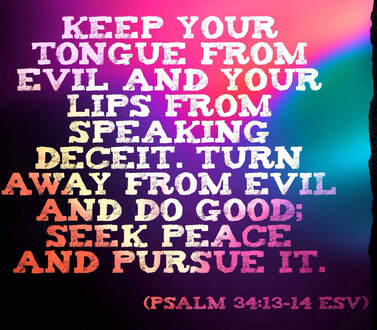 There is a word in the scripture above that has gone out of normal use.  It is the word, “blaspheme”.  Blasphemy is to speak evil of someone or God.  From ancient times, this meant to be consumed with hatred and revulsion toward that person or God.  Just because the word blaspheme has gone out of normal usage does not mean blasphemy no longer occurs.  In fact, it occurs very frequently in social media and even in the news as of late.  Long ago, it was considered ominous to “speak evil” of anyone, even someone who died.  The phrase, “Do not speak evil of the dead”, was commonly uttered in English parlance.  Today, that has changed.  People speak ill of others all too often.  Poisoned intentions spew forth in many public and private spaces.  Evil words are passed along purposefully in order to manipulate others and destroy reputations.

Our scripture for today speaks to the issue of blasphemy.  The first letter from Paul to Timothy was meant as a teaching tool for young Timothy, a budding pastor.  The entire letter of 1 Timothy contains wisdom garnered by Paul and was meant to instruct young Timothy in the finer points of ministry.  In the very first chapter of this letter, Paul mentions two men, “Hymenaeus and Alexander”.  These two men were soundly rebuked by the Apostle Paul.  He believed they had rejected or “shipwrecked” their faith.  They had abandoned true righteousness.  After their spiritual error, what came next from these two men was not unpredictable.  They began to blaspheme.  Paul wrote to Timothy that because of this tendency to blaspheme, they were “handed over to Satan”.  Paul was no longer going to pray for their safe-keeping.  By speaking evil of others (blaspheming), these men lost their spiritual protection from Paul and ultimately Almighty God.

As I prepared to write this meditation, I studied the original Greek word for “blaspheme”.  In New Testament times, the word meant to “speak a word of evil”, “render abusive speech”, “offer strong mockery”, “use derision to destroy another’s reputation”, or “utter personal attacks”.  In Greek and Roman eras, blasphemy was a serious taboo.  It was seen as cruel, inhumane, and evil.  For a Christian to behave in this manner was considered egregious by the Apostle Paul.  That is why he had no mercy for Hymenaeus and Alexander.  To blaspheme God was especially heinous.  True Christians should never do such things.  In ancient times during Christian persecution, to prove a person was not a Christian, Roman soldiers would ask people to blaspheme Jesus in order to save their lives.  Even these torturers knew that true Christians would not blaspheme their Lord.   However, in today’s world blasphemy is not just commonplace in the secular world.  It is not only employed to climb up the ladder of success.  It is even used as a subversive tactic in Christian circles.

A congregation just outside the city limits of Indianapolis, Indiana, let its pastor go.  The reason?  A rumor was begun by members who didn’t like the pastor.  They smeared his reputation.  Before the truth could be told, the pastor was forced to resign.

In a North Carolina congregation, a church leader used a hacker to break into his pastor’s emails.  He then began to circulate and manipulate the information he discovered that was obviously meant to be private.   This resulted in the pastor not only being forced to leave the church but ended up with the pastor being accused of impropriety by an ecclesiastical council.

Blasphemy is a common tactic in politics.  It is often used by governments in propagandistic enterprises, to sway public opinion.   It is also dangerously employed by sinful church folk who may be no different from Hymenaeus and Alexander in our scripture for today.

There was a large church out east that had several big events in their yearly calendar.  Due to a problem with the weather and scheduling, two big events occurred within hours of each other.  The two events were put on by the two women’s groups in the church.  When the time came for the first event, the tables were set up.  The place settings were elaborately decorated.  Then, women from the second event realized that they needed more dinnerware for their own event. They "borrowed" some of the place settings from the other group to complete their preparations.   The two women’s groups viciously attacked each other verbally.  The pastors were summoned.  Accusations and derisions were vehemently exchanged.  Fights broke out in the church building and in a local pub.  The fight over silverware ended in a church split.  Do not underestimate the power of blasphemy to destroy relationships and godly institutions.

Despite the fading of the use of the word blasphemy in modern cultures, there has come a subsequent rise in the use of blasphemy as a social and political weapon.   You might be tempted to use it out of vengeance or jealousy or envy.  To do so is to go against God.

Did you know that the Beast of the book of Revelation is noted in scripture to be a blasphemer (Revelation 13:6)?   Those bound for hell blaspheme God as well (Revelation 16:11,21).  Do you want to use the same tactic as Satan’s minions?  Should blasphemy ever come out of your mouth for any reason?

Worldly people will use blasphemy against you and God.  It is certain.  Evil words will be uttered against the good.   Satan will see to that.  You can’t stop blasphemy from destroying the good.  What you can do is make sure that you aren’t the one to wield this hateful weapon.
​
Have you ever been tempted to utter blasphemies against another person or God?   Did you succumb to the temptation?  The armies of Satan are known for employing blasphemy.  The people of God know well enough to refrain from its use.   A lack of faith caused Hymenaeus and Alexander to blaspheme.  For their slanderous words and actions, they lost their protection from God.   Blasphemy is dangerous business.