“But Martha was distracted by the big dinner she was preparing. She came to Jesus and said, “Lord, doesn’t it seem unfair to you that my sister just sits here while I do all the work? Tell her to come and help me.” But the Lord said to her, “My dear Martha, you are worried and upset over all these details! There is only one thing worth being concerned about. Mary has discovered it, and it will not be taken away from her.”” (Luke 10:40–42, NLT) 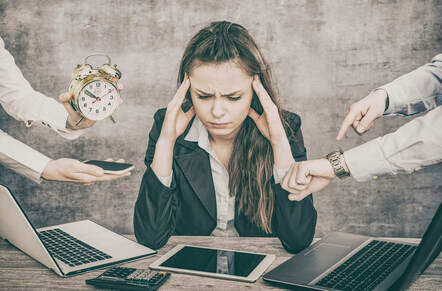 “A former police officer tells of the tactics of roving bands of thieves: ‘They enter the store as a group. One or two separate themselves from the group, and the others start a loud commotion in another section of the store. This grabs the attention of the clerks and customers. As all eyes are turned to the disturbance, the accomplices fill their pockets with merchandise and cash, leaving before anyone suspects. Hours—sometimes even days—later, the victimized merchant realizes things are missing and calls the police. Too late.’
How often this effective strategy is used by the Evil One! We are seduced into paying attention to the distractions, while evil agents ransack our lives. In times when well-publicized sins have captured our attention, we do well to check our own moral pockets to see if we have anything left.”  (Tom McHaffie)

How often are you distracted?  How often do your prayers ramble off on nonsensical topics while important aspects of your spiritual life go unexamined?  Do you let worldly distractions keep you from focusing on your faith?  Does your mind wander during worship and before long you aren’t even focusing on godly things?

When cell phones were still rare a number of years ago, I remember sitting in the back of the sanctuary during a worship service in which I didn’t have to preach.  It was nice to listen to someone else preach for once!  Enjoying the service and the sermon, my attention was captured by a group of young girls off to the far edge of the pew four rows up.  Instead of looking at the pastor, they were all hyper-focused toward one girl on the end.  They were whispering animatedly, excitedly.  I watched more closely.  As I did, I realized that the girl on the end was on her cell phone sending text messages from all the different girls in her row to another friend.  I found out later that they were sending texts to another girl in the church balcony.   If Jesus Christ would have said something from the pulpit that day, those girls would have had no clue.  They were utterly distracted by the messages.  Because of their distractions, I became distracted because of their hushed antics.  None of us were listening to the preacher!

There are so many things that can capture your attention and keep its focus away from the Lord.  Like the cell phone captured the attention of the girls in the story above, things as well as people can capture the imagination of those of faith, pulling them away from the holy.  While mesmerized by these worldly distractions, they often miss something God is saying.  The lust for the latest electronic gadget can easily entice the person to spend inordinate amounts of time and money on the latest fad.  Social media has been found to drain the time away from many an internet user.  Studies have shown that people are so drawn to social media, likes, memes, and cat videos that they find it difficult to spend time on things that really matter.  Entire web sites are dedicated to pulling you away from your responsibilities while you while-away the hours looking at “10 outfits that attract more men” or “puppy videos that will make you smile”.

In the scripture for today from Luke 10, Jesus is at the house of Mary and Martha.  He has been invited for a meal.  While there, the scripture mentioned that “Martha was distracted by the big dinner she was preparing” (Luke 10:40).  She was so caught up in the meal preparations that she got upset at her sister’s fascination with Jesus’ teachings.  She even told Jesus that he should force the sister to get back to work (Luke 10:41).  Jesus would have nothing of it.  He even chastised Marth for being “upset over all the details” instead of allowing her sister Mary to enjoy Jesus’ presence.

Like was with Martha, are there situations when Jesus might want to chastise you for becoming distracted?  During prayer or worship, does your attention change focus?  Is there something God wants you to focus more attention upon?  Are you too upset with the details?   As mentioned in the initial story today, the Evil One often uses distractions to pry your attention away from what God desires.  The lures of gadgets and trinkets and baubles and sins and pleasures and details can easily draw you away when God needs you entirely focused.  Remember when Jesus told his disciples to “watch and pray lest they enter into temptation” (Matthew 26:41)?  What did they do?  They fell asleep only to find out that soldiers were coming for Jesus at that very moment.  Inattention and distraction often cause much grief when you fail to notice God’s action or Satan’s games.
click here to See september Daily Meditations